More than 400,000 Displaced in Northwest Syria in 3 Months, Says UN 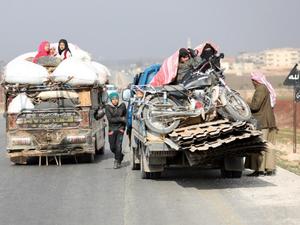 More than 400,000 people have been displaced in northwestern Syria over the past three months, the UN said Friday, as the government presses an intensified bombardment of the rebel-held region.

"More than 400,000 people have been displaced since the end of April," said David Swanson of the United Nations humanitarian affairs agency OCHA.

So sweet to see SOSeash gang on the roads :)

we should send them few more like 1.5 millions daeshit terrorists refusing to leave lebanon