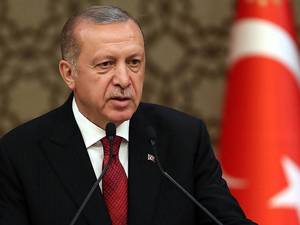 Turkey's President Recep Tayyip Erdogan said Friday that it planned to start using the Russian S-400 missile defence system -- a bone of contention with the United States -- in April 2020.

"In the coming spring, God willing in April 2020, we will be able to start using this system," he told a gathering of his Justice and Development Party (AKP) in Ankara.

Washington has reacted to Turkey's purchase of the S-400, which was delivered this month, by kicking the country off its F-35 fighter jet programme.

The US says Russia will be able to glean sensitive technical knowledge about the new fighter if it is operated alongside the S-400.

"You won't give the F-35? Very well, excuse me, but we will take measures in this regard and will turn towards others," Erdogan said.

"No threats or sanctions against Turkey, especially threats to remove (Turkey) from the F-35 project, will prevent Turkey from ensuring its security priorities.

"I hope the US will act with good sense regarding the S-400," he added.

Turkey and the US have also held talks this week on establishing a buffer zone in northern Syria to prevent clashes between Turkish and Kurdish forces.

Ankara sees the Syrian Kurdish YPG militia as a "terrorist" off-shoot of Kurdish insurgents in Turkey, but the YPG has been a key ally for the US in its fight against the Islamic State extremist group.

"However the talks with America on setting up a safe zone on Syria's border end, we are determined to destroy the terror corridor east of the Euphrates," Erdogan said.