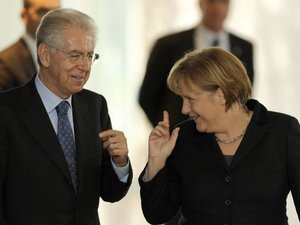 German Chancellor Angela Merkel on Wednesday assured Italy its tough austerity measures would be "rewarded", amid signs her own economy was grinding to a halt as tensions in Eurozone markets simmered.

Rome's painful austerity measures "will strengthen Italy, will improve its economic prospects," said Merkel, adding: "We have watched with great respect how quickly they have been implemented."

"I think that overall, the work inside the Italian government will be rewarded," said the chancellor, who has spearheaded Europe's efforts to tame the Eurozone crisis now entering its third year.

For his part, Monti expressed his hope the markets would recognize the bitter sacrifices demanded by the austerity plan he has pushed through and that this would "translate to sensible rates."

Italian borrowing costs had remained stubbornly above the seven-percent mark commonly seen as unsustainable, but dropped to 6.94 in late Wednesday trade as investors also cheered better-than-expected deficit figures from Rome.

Monti insisted that despite the debt mountain looming in the euro area's number three economy, Italy's problems were "not contagious for the Eurozone".

However, Germany's statistics office Destatis had earlier Wednesday said that Europe's top economy, until now relatively immune to the crisis, likely went into reverse in the fourth quarter of last year.

Despite growing by a solid 3.0 percent in 2011, German gross domestic product (GDP) appeared to shrink by "around a quarter of a percentage point" in the final quarter, Destatis official Norbert Raeth told a news conference.

The data prompted many analysts to predict that Germany would enter a recession at the start of this year -- defined as two successive quarters of negative growth -- although most forecast a bounce later in 2012.

"If the euro crisis does not get worse or is finally brought under control, the German economy can rebound nicely from the summer onwards," he said.

However, there was a one-in-four chance of the crisis not being resolved or even spiraling completely out of control and "in such a scenario, Germany would enter a major recession," he warned.

Signs the crisis was far from being resolved emerged from the European Central Bank where figures showed banks parking a record sum with the ultra-secure Frankfurt-based institution rather than lending to each other.

Meanwhile, on the bond markets, Germany paid a record low rate at an auction of five-year bonds amid huge demand, suggesting nervous investors were flocking to what is seen as the safe haven of Europe's strongest economy.

With market conditions still unstable, Spain meanwhile said it planned to borrow 86 billion euros on financial markets in 2012, nearly 10 billion euros less than it raised by issuing sovereign debt in 2011.

And in Greece, where the Eurozone crisis began, Development Minister Michalis Chrysohoidis said the country's 2011 public deficit, a key gauge of its recovery closely monitored by creditors, had reached 9.6 percent of GDP.

The figure was higher than state budget estimates but better than a feared two-digit shortfall.

Greece was likely near the top of the agenda as French President Nicolas Sarkozy welcomed his former finance minister Christine Lagarde back to Paris, this time as managing director of the International Monetary Fund.

Lagarde, who made no comment after the 45 minutes of talks, also met French Prime Minister Francois Fillon.

Lagarde said during a visit to Berlin on Tuesday that aid to Greece needed to be increased by "a significant amount" of "tens of billions" of euros, a German government source told the business daily Handelsblatt in a pre-release of its Thursday edition.

Greece stands to unlock some 130 billion euros ($165 billion) in new aid from the Eurozone, provided it can successfully wrap up talks with banks on a write-down of its privately-held debt of at least 50 percent in order to reduce the country's debt by 100 billion euros.

EU officials have said a deal is near and the chief negotiator for private investors, Charles Dallara, the head of the Institute of International Finance, is set to meet Greek Prime Minister Lucas Papademos on Thursday, according to sources.

According to the Handelsblatt, Lagarde and Merkel also agreed at their Tuesday meeting on the need to complete talks between banks and Greece on a debt write-down even if that meant not getting as much from the banks as hoped.

"This subject must be resolved in order to calm the markets," the source said.