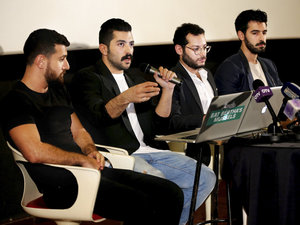 The call followed a meeting for the committee at the Catholic Media Center that was presided over by Bishop Boulos Matar and attended by Maronite Archbishop of Byblos Michel Aoun and the members of the committee.

“The conferees discussed the issue of Mashrou’ Leila’s participation in the Byblos International Festival,” the statement said.

“The Archbishop of Byblos said that two members of the band had admitted during a meeting held at the archbishopric that some of the band’s songs insult religious rituals, showing an intention to apologize for this act and readiness to remove what should be removed out of respect for the sentiments of the Christian and Muslim religions in Lebanon,” the statement added.

“Archbishop Aoun wanted this apology to come from all of the band’s members at a joint press conference, the thing that has not happened until today, which reflects the presence of a veiled intention on their part to pass time,” the statement said.

Warning that the church rejects that “its rituals and the faith of its sons be harmed in any form,” the committee called on all officials to “shoulder their responsibilities according to the Lebanese constitution, which respects all religions and offers reverence to God.”

It added: “The state should not accept any coup against its constitution, which is the symbol of its freedom, presence and dignity, and it calls on the relevant officials and authorities to take the necessary measures to deprive anyone of any chance to insult religions and to stop this concert.”

They have played frequently in Lebanon since forming in 2008 while studying at the American University of Beirut. But they have sparked controversy in Egypt and were banned from performing in Jordan.

On Facebook, a group calling itself the "Soldiers of God" started a campaign against the concert, posting warnings suggesting it would take to the streets to prevent the event from taking place. Others weighed in, starting a hashtag that called for stopping the performance.

Late Wednesday, the festival's artistic director, Naji Baz, said a compromise had been reached after a meeting with the town's Maronite bishop.

"We reached an arrangement whereby the concert will happen as planned, as long as the band holds a press conference in the coming days," he said.

The band are to "apologize to all those who may have been offended" by two of their songs considered to be "insulting to sacred symbols in Christianity," he said.

The two offending songs -- titled "Idols" and "Djin" -- will not feature in their set at the festival on August 9, he said.

The band took down posts "violating sacred symbols of Christianity" at the request of the State Security agency, the prosecutor’s office said.

The rhetoric by religious and conservative figures spurred a response from activists, rights groups and outraged Lebanese, angry over what they see as their country's mounting suppression of freedom of expression.

"This is so ridiculous. The whole world seems to be regressing into illiberalism," wrote renowned Lebanese-American writer and novelist Rabih Alameddine, who performed with the band at The Met Breuer in New York earlier this month. "Mashrou' Leila is one of the greatest things to happen to the Middle East."

Social media activists have meanwhile called for a Monday sit-in at the Samir Kassir Square in solidarity with the band.

It was not clear what specifically triggered the current outburst. Some critics cited a photo shared online by Sinno that depicts a painting of the Virgin Mary with her head replaced by the pop star Madonna.

The band issued a statement last Monday saying they "respected all religions and their symbols," and were saddened by "the distortion of the lyrics of some of our songs."

Amnesty International issued a statement Tuesday calling on the Lebanese government to ensure the band is protected and the concert goes ahead.

"It is unconscionable that there continue to be such calls emanating from institutions that are meant to serve as role models to their constituencies, and can and should be upholding the right to freedom of expression," said Lynn Maalouf, Amnesty's head of research for the Middle East.

The debate has been trending on Twitter for days.

In a country beset by political, economic and financial troubles, many lamented the focus on the arts and censorship.

Columnist Diana Skaini, writing in the daily An-Nahar, said the debate goes beyond Mashrou' Leila, to the heart of Lebanon and its message as a country.

"Either we consecrate bans and populism and say goodbye to what remains of this moderate spot, or we confront this tyrannical wave that goes against our pluralistic and diverse country," she said.

After a Mashrou' Leila concert in Egypt in 2017, at which members of the audience waved a rainbow flag, the authorities launched a crackdown on the country's LGBT community.

Planned performances by the band in Jordan were canceled in 2016 and 2017, amid protests by conservative lawmakers.

The Maronite Church is persecuting people, censoring them just as it once was persecuted and censored centuries ago. This is the first step before violating the group's physical integrity. One would beleive that they wouldn't repeat what has been done to them but alas they are no better.

It just goes to show you how controlling the religious mafia can be, remember a few years back when we had the Salman Rushdi fiasco or the Danish Butter incident and how ridiculous that looked? Now we have the Maronite church version saying "I'm hurt by this bands words". Really? a head of church who claims he has so much pain due to the bands words? This is a person who wears a skirt most of the time and is driven around in a new mercedez acting like he is Gods direct descendant on earth claiming his organisation is damaged by this? You kind wonder how much faith he truly has one someone else disagrees with him? Or maybe he trying to tell others not to have a mind of their own? let the church do the thinking for them is much better. Meanwhile can you please all send in your 12% the epistle of God has his eye on a nice Qautroporte for the next year....

I'm glad the church said something. As a country there is no tolerance for any artist insulting the prophet or Imam Ali. Imagine if this concert was being held in Dahiyeh or Baarachit? Would there not be backlash? Why do you think the concert is being held here? Because they thought the Christians would allow this disrespect. I'm glad the bishops said something.

Words of the Ayatollah Libres lol....why dont you just say anyone who has a different opinion than me should be beheaded?

So Zahle, let me understand your concerns better. If a person was to insult Jesus, Mohammed and Bhudda would that make them any less? or would it make you change your mind about them? would you have less faith in Christ if someone was to say he did not like him or beleive in him? Disrespect is what you want to take away from it, if a person in the street says Ronald McDonald is a figment of someones imagination would you then say you will never eat another hamburger? Do you ever stop and wonder why people in the west go through life being able to move on and not dwell on these superfluous things while say a nut in Lebanon will go and blow himself up for his or her God?

Well I’ve seen Ronnie McDonald’s sitting on a bench, he does exist !