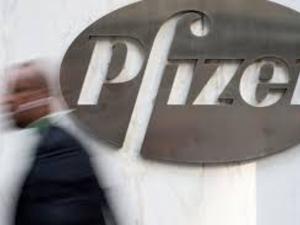 Pfizer announced Monday it will combine its off-patent drug business with the generic drugmaker Mylan to create a global leader in low-cost treatment, as drugmakers face intense political pressure to drive down prices in the United States.

The new entity will be 57 percent owned by Pfizer shareholders, and 43 percent owned by Mylan's. Its portfolio includes impotence drug Viagra, cholesterol pills Lipitor, painkiller Lyrica and the emergency allergy treatment EpiPen, according to a statement.

The combined company, to be named after the transaction is complete, will be led by Robert Coury, current chair of Mylan's board, who will serve as executive chairman.

Michael Goettler, head of Pfizer's off-patented drug business Upjohn, will serve as CEO, while Heather Bresch, the current CEO of Mylan, will leave the company.

Formally, Pfizer will give Upjohn independence as part of a tax-optimizing strategy. It will then merge with Mylan.

Each Mylan share would be converted into one share of the new company, which is predicted to have pro forma 2020 revenues of $19 billion to $20 billion.

The combination will allow Pfizer to boost sales that are sagging due to the loss of patent protection of certain drugs.