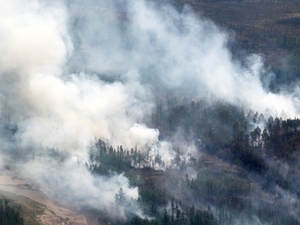 Gigantic forest fires have regularly raged through the vast expanses of Russia's Siberia, but the magnitude of this year's blazes has reached an exceptional level with fears of a long-term impact on the environment.

As fires sweep across millions of hectares enveloping entire cities in black smoke and noxious fumes, environmentalists warn of a disaster threatening to accelerate the melting of the Arctic.

More than 3.2 million hectares (7.9 million acres) were in the grip of fires on Monday, mainly in the vast regions of Yakutia in the north and Krasnoyarsk and Irkutsk in Siberia, authorities said.

The acrid smoke has affected not only small settlements but also major cities in Western Siberia and the Altai region as well as the Urals such as Chelyabinsk and Yekaterinburg, and disrupted air travel.

"The smoke is horrible. I am choking and dizzy," pensioner Raisa Brovkina, who was hospitalised in Russia's third-largest city Novosibirsk, told state television.

A "concentration of pollutants exceeding the norm" was recorded in several cities, including the capital Nur-Sultan, said the Kazakh meteorological service.

Aside from health fears for the local population, environmentalists warn the fires may accelerate global warming.

"The forest fires in the eastern part of the country have long stopped being a local problem," the Russian branch of Greenpeace said in a statement.

"It has transformed into an ecological disaster with consequences for the entire country."

According to the environmental group, almost 12 million hectares were burnt this year, causing significant CO2 emissions and reducing the future capacity of forest to absorb the carbon dioxide.

"Then there is the added problem that soot falling on ice or snow melts darkens it, thus reducing the reflectiveness of the surface and trapping more heat," the World Meteorological Organization told AFP in a statement.

Greenpeace Russia expert Grigory Kuksin said the soot and ashes accelerate the melting of the Arctic ice and permafrost -- the permanently frozen layer that has begun melting -- releasing gases that reinforce global warming.

Kuksin called the impact on the climate "very serious."

"It is comparable to the emissions of major cities," he said.

"The more fires affect the climate, the more conditions are created for new dangerous fires."

Greenpeace has launched a petition demanding Russian authorities do more to fight the fires.

- No resources to fight fires -

But the situation is complicated by the fact that Russia does not have enough money to contain the wildfires, environmentalists add.

The majority of the fires rage in remote or inaccessible areas and authorities make the decision to extinguish them only if the estimated damage exceeds the cost of the operation, experts say.

Otherwise, the role of Russian authorities is limited to monitoring the wildfires, they say.

Kuksin of Greenpeace said Russian officials do not prioritise financial resources to put out fires in remote areas, taking issue with such an approach.

"The maximum amount possible should be put out from the start," he said.

"We need to plan and allocate resources, but we continue to save money claiming it is 'economically impractical'."