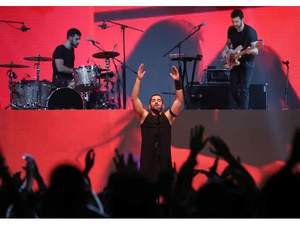 The organizers of the Byblos International Festival on Tuesday said they have called off the performance of world famous Lebanese rock band Mashrou' Leila to avert any "bloodshed."

The gig had been scheduled for Friday, August 9.

“In an unprecedented step and as a result of the successive developments, the (organizing) committee has decided to call off the Mashrou’ Leila concert scheduled for the evening of Friday, August 9 to prevent bloodshed and to preserve security and stability, contrary to the practices of some parties,” the organizers said.

“We regret what happened and we apologize to the fans,” they added.

A senior Maronite church source meanwhile told MTV that the decision aims to "avoid any security disruption that might result from this concert."

The decision is "a very rational action," the source added.

The cancellation follows online death and violence threats against the band and its fans and calls by Christian groups for the performance to be scrapped.

Lebanese Christian clerics called for the band to cancel their August 9, charging that two of their songs -- titled "Idols" and "Djin" -- were offensive to Christians.

There was no immediate reaction from Mashrou' Leila but activists and fans condemned the cancellation as an attack on freedom of expression in the country.

"This is a step back for Lebanon, which has always prided itself on embracing diversity and being a center for music, art and culture in the region," said Aya Majzoub, Lebanon researcher at Human Rights Watch.

On Monday, dozens of Lebanese held a protest in downtown Beirut objecting to the proposed ban and rejecting attempts by Christian clergymen and some right wing groups to ban the group.

"Regardless of our opinion of the songs and the band, we need to defend freedom of expression, because freedom is for everyone and for everybody. The day it stops, it stops for everybody," said writer and director Lucien Bourjeily.

Also on Monday, the Catholic Media Center, an authority that works with Lebanese authorities to censor artistic content, reiterated calls for the concert's cancellation.

It accused the band of prompting "ideas and actions that are offensive to the faith and its religious symbols."

The band issued a statement earlier this month saying they "respected all religions and their symbols," and were saddened by "the distortion of the lyrics of some of our songs."

They were expected to hold a press conference to issue a formal apology so the concert could go ahead, under an agreement between the Byblos festival and Lebanese authorities.

"We tried as much as possible to reach a solution... Why didn't they apologize?" asked the festival's artistic director, Naji Baz.

"I'm not sure an apology would have been enough anyway because things got out of control," Baz added.

Baz said organizers had no choice but to cancel the concert, which would have attracted a turnout of around 4,000 people.

"The situation became hysterical with direct threats being made to the security and safety of the audience and the performers," he told AFP.

Mashrou' Leila have often played in Lebanon since forming in 2008 while its members were still students at the American University of Beirut.

But it has created waves in the religiously conservative Middle East.

They have sparked controversy in Egypt and were banned from performing in Jordan.

After a Mashrou' Leila concert in Egypt in 2017, at which members of the audience waved a rainbow flag, Egyptian authorities launched a crackdown on the country's LGBT community.

The offended parties could've just called for boycott like civilized societies do. But here, especial us Maronites who pride ourselves on being cultured and liberal, if your silly clown act offends us, we will call for your blood like the turbanhead crazies do. This is a sad day for Lebanon. We are now as open-minded and civilized as Jordan and Egypt. Now anyone who feels "offended" by anything can ban it be threatening violence. Thank you the enlightened Dr Naji Hayek and the Maronite Archdioceses of Jbeil, you idiots have opened a Pandora's box and from this day on, every lunatic fundamentalist group will have you to thank for this when they decide what you say and what you do offends them.

Sad day for Lebanon, democracy, Christians and freedom. Bassil-Hizbollah duo have gradually destroyed everything special about Lebanon to make it resemble Iran's Bazij. Hizbollah can never survive in Lebanon without destroying our democracy, liberal education and economy (remember Green revolution in Iran by educated and middle class?) Bassil is the marionette used by Hizb to achieve all its objectives before they throw him under the bus along with Christian community and munasafe. Welcome to Aoun Dark Age!

"Called Off over 'Bloodshed' Fears"

Lebanese Christian clerics called for the band to cancel their August 9, charging that two of their songs -- titled "Idols" and "Djin" -- were offensive to Christians.

The Monsignor was so ecstatic that the gig was called off he started wanking at pictures of small boys.

In a country where peoples education is poor enough to see this as a success, sadly this will only encourage the rest of society to start this blind hatred.
Bhudda is fat and has a big tummy...so this should get the bhuddist here

Go read French journalist Frédéric Martel writes in his book “Sodoma,” as in Sodom, in Western Europe, “In the Closet of the Vatican” in the United States, Britain and Canada. It includes the claim that about 80 percent of the male Roman Catholic clergy members who work at the Vatican, around the pope, are gay. It contends that the more showily homophobic a Vatican official is, the more likely he belongs to that crowd, and that the higher up the chain of command you go, the more gays you find. And not all of them are celibate. Not by a long shot.

defended your 'faith'?!!! How did they defend shii'sim?

He wares the name of the devil himself: Michel Aoun

As I remember from my childhood catechism of the catholic church, Jesus taught us to love and forgive.
I naively believed Lebanon's Christians followed such an example, then discovered the massacres of Black Saturday, Quaratina camps and the Sabra and Chatila camps...
Lebanese Christians were horrible monsters that committed the ugliest atrocities in the civil war!
And now they are butchering the last remnants of freedom...