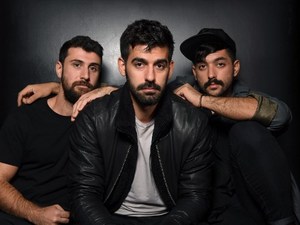 World famous Lebanese band Mashrou’ Leila has condemned what it called "a deliberate campaign" against it, after the organizers of the Byblos International Festival called off its August 9 performance over “bloodshed” fears.

In a statement, the band said the campaign was built on false accusations and a distortion of their lyrics.

Mashrou' Leila said it "sincerely regrets causing offense to anyone's beliefs" but denied that any of its songs were religiously offensive.

"We have been tried on the streets, judged and convicted by anyone wishing. This is a departure from the logic of the state, one that strikes at the core of our sense of our safety and ability to be artistic and creative," the band added.

Amnesty International said the decision to cancel the show was an "alarming indicator" of the deteriorating state of freedom of expression in Lebanon.

"This is the direct result of the government's failure to take a strong stand against hatred and discrimination and to put in place the necessary measures to ensure the performance could go ahead," Amnesty's Middle East Research Director Lynn Maalouf said.

On Tuesday, the festival’s organizers said they had cancelled the concert, apparently caving to pressure after weeklong calls by some Christian groups to pull the plug on the show, as well as online threats to stop it by force.

The organizers released a statement saying the "unprecedented step" of canceling the performance by Mashrou' Leila was done "to prevent bloodshed and maintain peace and stability."

"We apologize for what happened, and apologize to the public," they added.

Some church leaders and conservative politicians set off a storm of indignation on social media this month when they demanded that the Mashrou' Leila concert be canceled, accusing the Lebanese group of blasphemy and saying some of its songs are an insult to Christianity. The band, known for its rousing music and lyrics challenging norms in the conservative Arab world, soon became the center of a heated debate about freedom of expression.

The cancellation triggered a storm of protests and a campaign of solidarity with the band on social media.

The band has been a champion of LGBT rights in the Arab world and regularly sings about controversial subjects such as sectarianism, corruption and other social and political problems.

They have previously been banned from performing in Jordan and Egypt, but censorship demands in more liberal Lebanon — where it has performed on numerous occasions — are new.

On Monday, dozens of Lebanese held a protest in downtown Beirut rejecting attempts by Christian clergymen and some right-wing groups to ban the ensemble.

"Regardless of our opinion of the songs and the band, we need to defend freedom of expression, because freedom is for everyone and for everybody. The day it stops, it stops for everybody," said writer and director Lucien Bourjeily.

The band, whose name translates as "Night Project," was founded 10 years ago by a group of architecture students at the American University of Beirut.

Riding on the wave of Arab Spring uprisings that swept the Middle East, the band was embraced by Arab youth who saw it as part of a cultural and social revolution. The band members have gone on to gain worldwide acclaim, performing in front of sold-out crowds in the United States, Berlin, London and Paris.

The church leaders and conservative politicians are the real insult to Christianity. Irony is truly dead in this country: Here they are crucifying the band and claim it is for the protection of Christianity.