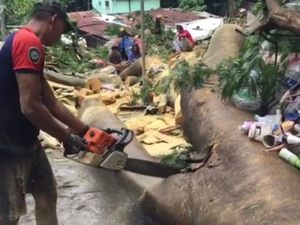 As experts gather in Geneva to finalise the most detailed scientific assessment yet of how we use the land we live off, one phenomenon to which we all contribute will be under close scrutiny: food waste.

Ahead of the release of the Intergovernmental Panel on Climate Change (IPCC) report on land use, here are some facts about food waste:

An IPCC draft summary says between 25-30 percent of food produced for human consumption every year -- approximately 1.3 billion tonnes -- gets lost or wasted. That's a 40 percent increase since 1970, or an additional 200 calories per person per day.

According to the UN's Food and Agriculture Organization (FAO), food loss and waste costs the global economy close to $1 trillion each year.

It also generates as much as eight percent of all manmade greenhouse gas emissions, the FAO says.

But not all food waste is equal. The IPCC report is expected to highlight vast disparities between food production and rejection in rich and developing nations.

A draft of the IPCC report says that people in Europe and North America each throw away an average of 95-115 kilogrammes (209-254 pounds) of food each year; people in sub-Saharan Africa and Asia throw away just 6-11 kg.

As well as wildly varying levels, the causes of food waste and loss change according to development.

"In the global south it's a lot to do with a lack of preservation, lack of transport systems, food being produced in the villages and not being able to make it to market," said Teresa Anderson, climate policy coordinator at ActionAid.

"Whereas in the north much more is wasted after it gets to the supermarkets. Supermarkets themselves throw vegetables away because they are not pretty enough, or because of their size or shape."

Around two billion people across the world are overnourished or obese, while 820 million people go to bed hungry each night.

The IPCC draft section on food waste says "consumption above nutritional needs can be seen as a form of food waste", which is "at least as large a contributor to food system losses" as throwing food away.