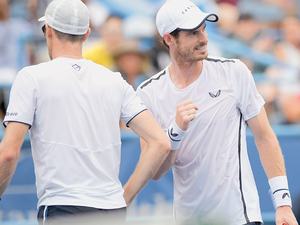 The Murrays, partnered for the first time since the 2016 Rio Olympics, downed Frenchmen Nicolas Mahut and Edouard Roger-Vasselin 6-4, 6-7 (7/9), 10-5 to reach the last eight at the U.S. Open tune-up event.

"It was a good atmosphere," Andy Murray said. "It felt like there were some good points and quick reactions out there."

Andy Murray is practicing singles and playing doubles as the former world number one, now ranked 222, continues his fightback from right hip surgery in January.

The 32-year-old Scotsman feared he could be forced into retirement before the operation. He returned to the court in June but only in doubles while he rehabilitates.

Andy departed Washington in tears from pain and frustration last year after a rain-delayed 3:00 am singles finish.

"I'm in a much better place than I was last year," Murray said. "Physically, I'm so much better now. To be competing again and pain-free is brilliant."

The British duo trailed 5-2 in the decisive super-tiebreaker but steamrolled back by taking the last eight points, with Jamie Murray's service winner securing the victory.

It was Andy who began the rally with a backhand winner and added backhand volley and drop volley winners on the two penultimate points.

Murray declared Monday his hip has responded better than expected and he was "quite close" to a singles comeback, perhaps as soon as Cincinnati in two weeks.

That would be only two weeks ahead of the US Open, with Murray also saying if he didn't play Cincinnati he would likely wait until after the U.S. Open, cautious of pushing his luck untested in best-of-five-set matches.

Murray, who won Grand Slam titles at the 2012 US Open and in 2013 and 2016 at Wimbledon, most recently played singles at the Australian Open in January, losing a first-round five-setter to Spaniard Roberto Bautista Agut.

The Murrays, who helped Britain win the 2015 Davis Cup, broke the French duo in the final game to claim the first set, then outlasted them to the finish after one hour and 51 minutes.

They will play for a semi-final spot against third seeds Michael Venus of New Zealand and Raven Klaasen of South Africa.

Greek top seed Stefanos Tsitsipas, the 20-year-old who ousted Roger Federer on the way to the Australian Open semi-finals, advanced to the third round in singles by defeating U.S. wildcard Tommy Paul 6-3, 7-5.

"It was a good start. I'm happy with the win," said Isner, who faces French 10th seed Benoit Paire next.

The teen has lost the first three ATP finals of his career this year at Rio, Lyon and Stuttgart.

In the accompanying WTA event, US third seed Sofia Kenin, who upset Serena Williams at the French Open, lost to compatriot Lauren Davis 5-7, 6-3, 6-4.