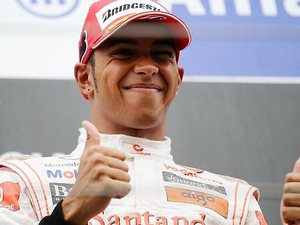 Lewis Hamilton bounced back from his nightmare weekend in Germany to top the times for Mercedes in Friday's opening free practice for the Hungarian Grand Prix.

The defending five-time champion resumed normal service with a best lap in one minute 17.233 seconds on a challenging morning at the Hungaroring.

This lifted him 0.165 seconds clear of last Sunday's victor Max Verstappen of Red Bull and 0.166 ahead of Sebastian Vettel of Ferrari, who was second at Hockenheim five days earlier. Verstappen's Red Bull team-mate Pierre Gasly was fourth, four-tenths down on Hamilton.

Despite Hamilton's recovery, having been unwell with a sore throat in Germany, it was another testing morning for Mercedes as his team-mate Valtteri Bottas failed to clock a lap time, the team deciding to change his engine after finding an issue in the early minutes.

The session was run in changeable conditions with a shower midway through making it difficult for the drivers as they adjusted to a briefly wet circuit and, as a result, several drivers including Verstappen, had big spins.

Kevin Magnussen of Haas was fifth ahead of Charles Leclerc of Ferrari, Nico Hulkenberg of Renault, Lando Norris and his McLaren team-mate Carlos Sainz and Kimi Raikkonen of Alfa Romeo.

Hamilton, who leads this year's title race by 41 points, pending an appeal by Alfa Romeo following the German race that may cost him two if they succeed, has won in Hungary a record six times.