Efforts to Shore Up UK Dam Intensify ahead of Storms 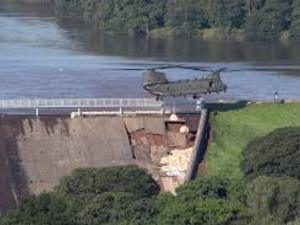 Emergency services battling to stop a reservoir dam in central England from collapsing brought in new pumps Saturday to reduce the water levels, as more storms were forecast.

Hundreds of people have been evacuated from the Derbyshire town of Whaley Bridge, after part of the dam holding back the Toddbrook Reservoir above them collapsed following heavy rain.

The Met Office weather center warned of further downpours and thunderstorms in the area on Sunday.

During a visit on Friday evening, Prime Minister Boris Johnson described the dam wall as "dodgy but stable", but said the 180-year-old structure would require a "major rebuild."

A Royal Air Force Chinook helicopter has been dropping bags of aggregate onto the section of the dam spillway which was damaged on Thursday after heavy downpours.

A police spokeswoman told AFP that extra pumps were being put in on Saturday as officials raced to bring the water level down in the reservoir.

After two nights out of their homes, some locals were allowed back briefly on Saturday to collect any essential items -- and family pets -- but warned that there remained a high risk to life in the area.