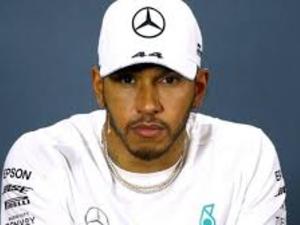 Lewis Hamilton proved he retains his pace and the intensity required for a title scrap when he topped the times for Mercedes in Saturday's third and final practice for Sunday’s Hungarian Grand Prix.

With dark clouds threatening rain, the revitalized defending five-time world champion responded to a record-breaking lap from Dutch tyro Max Verstappen of Red Bull with an outright record lap of his own at the hot, dusty and technical Hungaroring.

It resulted in Hamilton, much recovered from the virus that had hit him at last weekend’s Germany Grand Prix, on top in an all-time record lap time of one minute and 16.084 ahead of Verstappen by 0.013 seconds with four-time champion Sebastian Vettel of Ferrari only 0.082 seconds adrift in third.

Hamilton’s Mercedes team-mate Valtteri Bottas, who had required an engine change on Friday, was fourth, 0.271 behind the leader, with Charles Leclerc fifth for Ferrari and Pierre Gasly sixth in the second Red Bull.

British rookie Lando Norris was seventh for McLaren ahead of Kimi Raikkonen of Alfa Romeo, Carlos Sainz in the second McLaren and Kevin Magnussen of Haas.

The session was delayed by 10 minutes to clear oil deposited at Turn Four by a blown engine during an earlier F2 race.

This required much cement dust that blew in dusty clouds as darker heavier ones filled the sky.

The air temperature fell from a pre-session 25 degrees Celsius and the track dropped from above 40 to 38 as the threat of rain passed overhead.

"The dust coming off the track is incredible, no other way to describe it," said Norris as he sped to the early fastest lap.

Sainz traded best laps with him before Leclerc went top for Ferrari, the Italian team maintaining the speed they have found at the last two events. This was soon proved when a revitalised Vettel overhauled the Monegasque and then improved.

After a tentative first few laps, Hamilton went top to be succeeded by Verstappen, Bottas and then Leclerc before Hamilton regained the ascendancy in 1:16.339, a sequence that demonstrated the competitiveness of the leading cars.

The in-form Verstappen then swept to an outright lap record in 1:16.097, outstripping the previous all-time best time, but it was not enough to quell Hamilton’s enthusiasm.

The reduced session, trimmed to 50 minutes, following Friday’s rain-hit day, created an intense practice with all the top drivers pushing for times throughout – Hamilton proving that by clocking 1:16.084 on his final run in the final seconds.