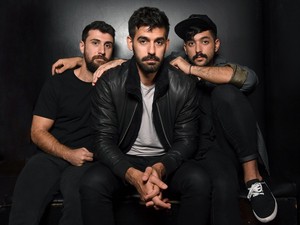 A Dutch band said Sunday it had cancelled its gig at a top Lebanon festival in solidarity with Mashrou’ Leila pulled from the event after threats over alleged offence to Christians.

Within Temptation joined other activists in protest after festival organisers last week pulled Lebanese indie group Mashrou' Leila from the programme over fears of "bloodshed".

The Dutch symphonic-rock outfit had been set to play on Wednesday at the event in the Christian-majority seaside town of Byblos.

"We have decided to cancel our show in Byblos in solidarity with Mashrou' Leila and in support of tolerance, freedom of speech and expression," they said in a statement on Facebook.

They made the decision after learning the festival had withdrawn Mashrou' Leila from the programme "due to security reasons after religious fanatics demanded their performance to be cancelled followed by violent threats", they said.

Lebanese clerics have accused Mashrou' Leila, whose singer is openly gay, of offending Christians in two of their songs titled "Idols" and "Djin".

Critics on social media also threatened to attack the concert if the Lebanese band went ahead with the performance on August 9.

On Sunday, the festival's artistic director said he was saddened to have lost another band but did not regret last week's decision to cancel Mashrou' Leila.

"The security of our artists and audience is our absolute priority," Naji Baz told AFP.

"We have never before cancelled a performance... If we did it this time, albeit with an enraged heart, it's because we absolutely had to," he said.

Mashrou' Leila has said it "sincerely regrets causing offence to anyone's beliefs" but denied that any of its songs were religiously offensive.

Rights groups have denounced an increase in restrictions on freedom of expression, while activists and fans have protested in the street and online.

Religiously diverse Lebanon is one of the Middle East's more liberal countries, but its myriad of recognised sects still wield major influence over social and cultural affairs.

Mashrou' Leila has often played in Lebanon since forming in 2008 while its members were still students at the American University of Beirut.

But it has created waves in the religiously conservative Middle East.

After a Mashrou' Leila concert in Egypt in 2017, at which members of the audience waved a rainbow flag, Egyptian authorities launched a crackdown on the country's LGBT community.

Like the churches and mosques care if all the bands in the world cancelled their gigs in Lebanon loooooool. Lebanon will never have respect for the individual it will take a few more centuries the Lebanese would rather fill up on humus thats the priority not humanity.