Chinese Yuan Falls to Weakest Level against Dollar since 2010 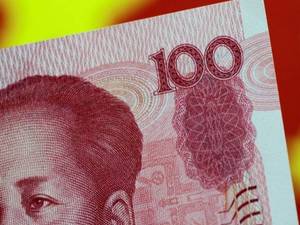 The Chinese yuan fell to its lowest level against the dollar since August 2010 in morning trade on Monday, fuelling speculation that Beijing is allowing currency depreciation to counter threatened US tariffs.

The offshore currency weakened to 7.1085 to the dollar, days after US President Donald Trump announced a plan to impose fresh tariffs on another $300 billion in Chinese goods, sharpening trade war tensions between the world's two biggest economies.

The onshore yuan also tumbled, hitting 7.0307 in Monday morning trade to reach its lowest level since 2008.

Both the onshore and offshore yuan breached the 7.0 level against the dollar, which investors see as a key threshold in currency value.

Trump has frequently accused China of artificially devaluing its currency in order to support its exports -- charges long denied by Beijing.

The US president jolted global stock markets last week when he issued the threat of more tariffs just a day after US and Chinese trade negotiators revived talks aimed at ending the year-long dispute.

The extra 10 percent duties Trump threatened to implement from September 1 would mean he has now targeted virtually all of the $500 billion in goods America buys from China every year.

China on Friday threatened to retaliate to any new US tariffs -- it has already imposed its own duties on $110 billion in American goods, almost all of the products it imports from the country.

A report from Bloomberg News said China has also asked its state-owned enterprises to stop buying US farm goods, in a further sign of escalating tensions.

The yuan is not freely convertible and the government limits its movement against the US dollar to a two percent range on either side of a central parity rate which the People's Bank of China (PBOC) sets each day to reflect market trends and control volatility.

The daily central rate was at 6.9225 per dollar on Monday, 0.33 percent weaker from Friday.

"It appears that the tariffs hike suggests the return of tit-for-tat moves and a suspension of trade talks, and the PBOC sees no need to keep the yuan stable in the near term," Ken Cheung, a senior currency strategist at Mizuho Bank, told Bloomberg News.

In a statement Monday morning, the PBOC said the exchange rate against the US dollar had been "affected by unilateralism and trade protectionism measures and the imposition of tariff increases on China".

The central bank said the yuan remained "stable and strong against the basket of currencies" and said it would "resolutely crack down on short-term speculation and maintain stable operation of the foreign exchange market and stabilise market expectations".

It went on to say that it had the "experience, confidence and ability to keep the RMB exchange rate basically stable at a reasonable and balanced level".

Julian Evans-Pritchard, senior China economist with Capital Economics, said the PBOC has "effectively weaponised the exchange rate" by linking the currency with the US trade war.

"Given that their goal is presumably to offset some of the impact from additional US tariffs, they are likely to allow the currency to weaken further, probably by 5-10 percent over the coming quarters," said Evans-Pritchard.

Okay, the Chinese central bank moved the range of movement by 0.33% in the direction of a higher yuan-per-dollar rate, which means a weaker yuan. "The daily central rate was at 6.9225 per dollar on Monday, 0.33 percent weaker from Friday." "Weaker" means more yuan per dollar. Without other factors, that looks like currency manipulation.

Maybe not. The Chinese central bank adjusts this daily rate in light of two factors: its intended range of value for the yuan and market circumstances. If Trump's blustering caused the dollar, the international reserve currency (by default, not because any government chose it as such), to strengthen, maybe such an event requires adjustment of the daily rate merely to maintain stability in exchange trading. If your car gets a flat tire, you have to turn the steering wheel so as to maintain control of the car, even if this momentarily takes you away from where you want to go.