Factfile on the World's Most Expensive Defenders 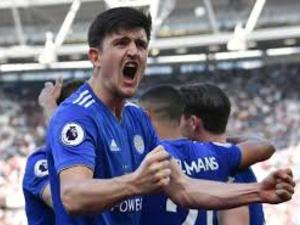 Manchester United made Harry Maguire the world's most expensive defender on Monday as they bought the England center-back from Leicester for a reported fee of £80 million ($97 million).

AFP Sport looks at the top five most costly defenders of all time:

The England center-back was top of Manchester United's transfer window shopping list after their defensive woes last season and boss Ole Gunnar Solskjaer finally got his man with a fee so huge that even big-spending Manchester City bowed out of the race to sign him.

Liverpool paid Southampton a then world-record fee for a defender to sign the Netherlands center-half and Van Dijk has proved a huge success, helping Liverpool reach two Champions League finals. They won the second of those, against Tottenham, to be crowned European champions for a sixth time.

The France international moved to Spain at the age of four and joined Atletico Madrid's junior set-up. Hernandez became a World Cup winner in 2018 and made more than 100 appearances for Atletico before joining Bundesliga champions Bayern at the end of last season.

De Ligt made his Ajax and Netherlands debut aged 17, quickly making the switch from deep-lying midfielder to center-back. De Ligt played more than 100 games for Ajax and captained a youthful side to the semi-finals of the Champions League last season before joining Italian champions Juventus a month before his 20th birthday.

The French center-half joined Athletic Bilbao at the age of 16. Also able to play left-back, Laporte made more than 200 appearances for Bilbao before Manchester City signed him for a then club-record fee in January 2018. He has since won two Premier League titles at City, as well as League Cup and FA Cup winners' medals.