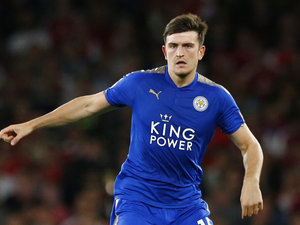 Harry Maguire became the most expensive defender in the world when he signed for Manchester United from Leicester City for a reported £80 million ($97 million) on Monday.

Jamie Vardy may joke about the size of his former Leicester teammate's head but, according to a former schoolteacher, Maguire has brains as well as brawn.

"He was a remarkable pupil who always came in and worked very hard," Sue Cain, deputy headteacher at Maguir's old school told the Derbyshire Times.

"He was never in any trouble and he had such a good attitude. He did everything you asked him to do and he never questioned why. He was a popular lad."

Cain said he could have forged a career in the grey-suited world of accountancy. "He got A* and A grades in his GCSEs," she said. "I think he would have gone on to study business or maths and probably have been an accountant."

Although Maguire began his nascent football career as a teenager in midfield, Sheffield United academy manager John Pemberton switched him to central defense, saying his ability to bring the ball out of defense made him stand out.

Hardly a surprise then that Maguire's idols were John Terry and Terry's long-time international partner Rio Ferdinand. Ferdinand stood out for Maguire. "I really looked up to them, especially Rio Ferdinand, because he brought the ball out of defense really well," Maguire said when he was at Hull.

"Very comfortable on the ball and he had a bit of everything in his prime. A great center-half in his time."

Maguire turned up at his first international get-together in 2017 not with his belongings in designer luggage but in a bin bag. His mother was not impressed and social media had lots of fun at his expense with tweets such as "Harry already sorting out the rubbish defense."

He took it in good heart. "I've seen that on Twitter with the bags -- it was just full of boots and shin pads and dirty stuff, which I'll give the kit man," he explained. "I'll try and get some in future. My Mum mentioned it. She gave me a text later on saying what's with the bags? It was just a bit of fun. I try my best to keep my feet on the floor and stay humble and let my ability do the talking."