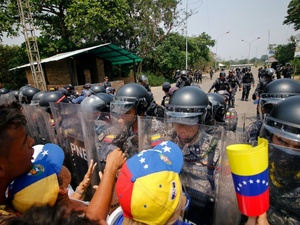 Four actors taking part in a satirical play about two gay police officers were arrested and accused of ridiculing and usurping the functions of Venezuela's authorities, sources said on Monday.

Actors Pedro Wise and Isaias Ovalle were arrested on Sunday night following a performance of "Two Cops in Trouble," which has been running at a Caracas theater since July 19.

Director Leonam Torres and producer Johana Villafranca were also arrested, with all four accused of "the crime of usurping public function when pretending to present a theatrical piece while wearing the regulatory uniform" of police, according to an official dispatch leaked to the press.

The report said the actors had tried to "ridicule and distort the true functions of police" and that their outfits were confiscated as evidence.

A photograph of the detainees alongside their wives and police in camouflage uniforms was shared by various online media, including Contrapunto.

Lawyers representing the detainees told AFP they were confident their clients would be released without charges.

"They've been treated well. They haven't been mistreated," one of the lawyers said.

Ovalle had predicted his arrest in an Instagram story published on Sunday.

"If I wake up chopped up, incinerated, kidnapped or dead, you'll know why. It's not a game, it's serious, so come and see the show before it gets closed down," Ovalle wrote.

Carlos Correa, director of the Espacio Publico (Public Space) NGO, described the arrests as a "barbarity."

"It's an open violation of the human right of freedom of expression. The theater is a place for criticism," he told AFP.