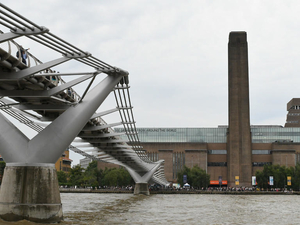 A six-year-old boy thrown from a tenth-floor viewing platform at London's Tate Modern gallery is a French national who was visiting the British capital with his family, police said Monday.

The boy is no longer in a life-threatening condition, according to London's Metropolitan Police, who appealed for further witnesses to the Sunday afternoon incident to come forward.

A 17-year-old boy who was initially detained by members of the public on the tenth-floor platform and then arrested by officers, remains in custody on suspicion of attempted murder.

"This is being treated as an isolated event with no distinct or apparent motive," senior investigating officer DCI John Massey said in a statement, adding there was no known link between the victim and the teen arrested.

He said the victim was now in "a stable, but critical condition in hospital with his family".

Massey asked anyone in the vicinity of the viewing platform who might have witnessed the incident but left immediately afterwards in shock to contact police.

"My team is also very keen to talk to you if you witnessed a male whose behavior seemed out of place, suspicious or worrying, in the hour or two before the incident in or near the gallery," he added.

The contemporary art museum on the banks of the River Thames, Britain's most popular visitor attraction, was evacuated but reopened on Monday.

However, the Tate said the viewing platform was closed. The boy fell from there onto a fifth floor roof and was airlifted to hospital by helicopter.

Witnesses who were on the viewing platform at the time said they heard a woman screaming "Where's my son, where's my son?"

"We did not notice the mum before, we noticed her after because she was hysterical by then," she said.

She said visitors quickly gathered around a man who was nearby, who was restrained by members of the public. He "just stood there and was quite calm," she said.

A spokesman for the Tate said: "Tate is working closely with the police to help with their investigations. All our thoughts are with the child and his family."

The Tate Modern recorded 5.87 million visits in 2018, according to the Association of Leading Visitor Attractions.