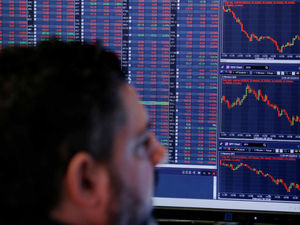 Global equities had tumbled Monday, with the biggest losses on Wall Street following a sharp fall in the yuan's value against the dollar that prompted Washington to formally designate Beijing a currency manipulator.

The yuan broke above 7.0 yuan to the dollar on Monday, a level investors see as a key threshold in the Chinese currency's value, and global stocks slumped amid fears of an escalating trade war between the world's two biggest economies.

"There's been a bit of a relief rally... aided by a slightly strong fix on the yuan and an unexpectedly strong reading for German factory orders, but this recovery remains highly tentative," noted David Cheetham, chief market analyst at XTB trading group.

"The recent surge in volatility has no doubt been exacerbated by light trading volumes, with August typically one of the quietest months of the year on this front due to vacations and annual leave."

Tensions have escalated since last week, when US President Donald Trump announced fresh tariffs on Chinese goods from September 1 that would subject virtually all of the $660 billion in annual merchandise trade between the two economies to punitive duties.

The yuan's slump has fuelled speculation that Beijing is allowing its currency to devalue to support exporters and offset Trump's threat to hit $300 billion in Chinese goods with 10 percent tariffs.

The slide in the yuan's value drew sharp criticism Monday from Trump who called it "a major violation which will greatly weaken China over time".

China fired back Tuesday, with the central bank saying it was "resolutely opposed" to the US designation. Trump has repeatedly accused China of currency manipulation -- charges Beijing has long denied.

Beijing's prior policy on the yuan had been to purchase foreign currencies, maintaining the yuan at a pre-determined level in part to avoid triggering capital outflows, but analysts said further weakening was likely.

"Continued yuan depreciation should be expected, albeit at a staggered pace," said Edward Moya, senior market analyst at OANDA.

"Currency wars are taking centre stage," he warned, adding that "Beijing is likely to tolerate further weakness and we could see another five percent before the end of the year."

Several rounds of tit-for-tat tariffs between the two countries have hammered trade, an important component of the global economy.

On Monday, Wall Street suffered its worst sell-off of the year, with the Dow Jones Industrial Average sinking 2.9 percent.