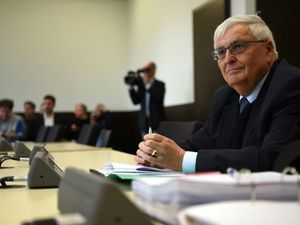 In a statement the attorney general's office said the accused "are alleged to have fraudulently misled the members of a supervisory body of the DFB organizing committee for the 2006 World Cup in Germany" in April 2005 about the true purpose of a payment of around 6.7 million euros.

Hors Schmidt, former secretary of the German football federation, has also been charged with fraud -- along with the Swiss Urs Linsi, secretary general of FIFA from June 1999 to June 2007.

Wolfgang Niersbach, who was a member of the 2006 bid committee and vice-president of the organizing committee, has been charged with complicity in fraud.

Charges of money-laundering were dismissed in July.

All four have denied the claims.

"This whole Swiss campaign is wretched, malicious and will completely fail, because I have nothing to reproach myself for," Zwanziger told AFP subsidiary SID.

"These incompetent investigators are banging their heads against a brick wall, and the wall will always win. The whole thing has long been a judiciary scandal and there has been no truly reproachable behavior on the part of the accused."

Niersbach said the accused only found out through the media that they had been charged and described the investigation as 'unspeakable.'

"The accusations made will prove to be completely unfounded," he added.

Proceedings against Franz Beckenbauer, a football legend in Germany, also implicated in the investigation, have been set apart because of the 1974 World Cup winning captain's ill health.

The attorney general's statement said that Beckenbauer "is unable for health reasons to participate or to be questioned in the main hearing in the Federal Criminal Court (FCC)."

The announcement of charges comes at the end of an investigation which opened in November 2015 into a payment of 6.7 million euros made in 2005 by the DFB to Robert Louis-Dreyfus, former head of Adidas, a partner of the DFB.

Der Spiegel broke the story in late October 2015 when it claimed that Germany used a secret fund of 10 million Swiss francs (6.7 million euros at the time) to buy votes in the bid to stage the 2006 World Cup.

"This sum was used to fund various payments made via a Swiss law firm to a Qatari company belonging to Mohammed Bin Hammam," the statement said.

At the time, Bin Hammam was a member of the FIFA Executive Committee and the FIFA Finance Committee.

In May 2018, Zwanziger was charged along with other former German football officials for "aggravated tax fraud" in the case.

But the procedure was abandoned five months later, for lack of evidence. However, the prosecution have since appealed the decision.