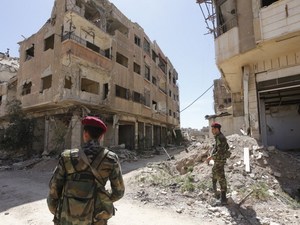 Syrian state-run media say government forces have captured a northwestern village and are getting closer to the town of Kfar Zeita, which has been held by insurgents since 2012.

The Syrian Observatory for Human Rights, an opposition war monitor, confirmed that Arbaeen was taken, adding that "regime forces are at the gates" of Kfar Zeita.

Kfar Zeita is one of the largest towns in the northern parts of Hama province. It lies on the edge of Idlib, the last remaining major rebel stronghold in the country.

On Monday, the Syrian army announced it's resuming an offensive on the rebel-held northwest, accusing insurgents of violating the latest truce there.