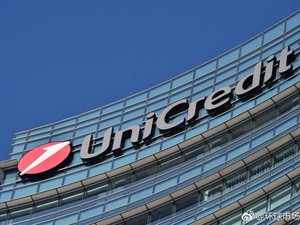 In the second quarter of the year, the bank's revenues declined by 4.6 percent from the same period a year earlier to 4.51 billion euros ($5.05 billion), a statement said, below a forecast of 4.61 billion compiled by UniCredit from 25 finance sector analysts.

"In the prevailing environment with rates expected to be lower for much longer, we adjust our full-year 2019 revenue guidance from 19.0 billion euros to 18.7 billion euros," it added.

As central banks keep their reference interest rates at historically low levels, commercial banks struggle to maintain profits in their core activity of lending to businesses and individuals.

In the second quarter of the year, net profit jumped by 81 percent on an annualised basis to 1.85 billion euros, owing in large part to the sale in July of UniCredit's remaining stake in the Finecobank asset management company.

The result nonetheless missed the average analyst's forecast of 2.22 billion euros by a wide margin.

UniCredit's closely watched Common Equity Tier 1 (CET 1) ratio, which is the ratio of funds available to absorb possible losses, came in at 12.08 percent however, indicating that it maintained a strong buffer.

UniCredit shares showed a loss of 2.7 percent at 10 euros in morning trading in Milan, while the FTSE MIB index on which they are listed was 0.12 percent higher overall.