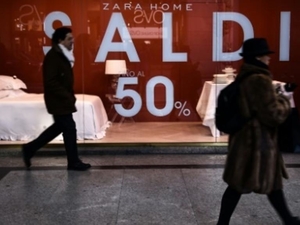 Italy's political situation is once again in flux after far-right Deputy Prime Minister Matteo Salvini pulled the rug out from under the ruling coalition.

With the eurozone's third largest economy facing possible snap elections, here is a look at the potential financial fallout.

- How will markets and ratings agencies react? -

As soon as the markets opened on Friday, the spread -- or difference between yields on 10-year Italian government debt compared to those in Germany -- jumped 25 points to 235 points, reflecting investor jitters.

"Uncertainty has a price: the spread, and the possible downgrade of Italy by rating agencies," Carlo Alberto Carnevale Maffe, professor at Milan's Bocconi University, told AFP.

Coincidentally, financial assessment agency Fitch is due to review its rating of Italy on Friday.

Its Italy rating currently stands at BBB with a negative outlook -- two notches above "junk" or non-investment grade.

Analysts are divided over how Fitch will rule -- it will not have had time to take into account the current political crisis, sparked by Salvini less than 24 hours previously.

In October 2018, rating agency Moody's downgraded Italy's rating to "Baa3", just above "junk", over concerns about the budgetary choices being taken by the populist coalition of Salvini's League and the anti-establishment Five Star Movement (M5S).

The already fragile economy "will pay the consequences of this crisis", Carnevale Maffe said.

- How is Italy's economy looking? -

The Italian economy is not doing well. After a "technical recession" in the second half of 2018, Italy experienced zero growth in its Gross Domestic Product (GDP) in the first six months of this year.

The European Commission and International Monetary Fund (IMF) expect Italian growth to be only 0.1 percent this year, while the government has forecast it at 0.2 percent.

But some experts are even more pessimistic, arguing that Italy is heading back into recession.

Italy's economy is being hit by a slowdown affecting the whole of Europe, as well as global economic uncertainty over trade tensions between Beijing and Washington.

Its companies are also investing less amid fears over political instability.

Unemployment stands at 9.7 percent, hitting 28.1 percent among 15-24 year olds -- well above the euro area average of 7.5 percent for the general population and 15.4 percent among the young.

Italy is also hampered by a vast debt ratio -- a whopping 132 percent of GDP, the eurozone's second-biggest after Greece.

Brussels has repeatedly called on Rome to do more to reduce its public deficit, leading to clashes between the populist government in Rome and the European Commission.

Italy has reluctantly agreed reduce it to 2.04 percent in 2019, instead of its previous forecast of 2.4 percent.

- What if Salvini wins snap vote? -

Salvini, a long-standing EU critic, says Italy's economy minister Giovanni Tria is far too accommodating and insists that "Brussels dogmas are not sacred".

"There will certainly be a confrontation with Europe" over the budget, Salvini said.

He is supported by small business owners in Italy's wealthy north and insists on a "courageous" budget, with significant tax cuts and major infrastructure projects, is needed to boost growth.

He also promises to stop a planned VAT hike, despite the 23 billion euros ($26 billion) in additional revenue it would bring in.