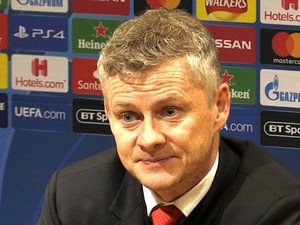 Ole Gunnar Solskjaer insisted on Friday that Manchester United can cope without Romelu Lukaku following the striker's transfer to Inter Milan, saying that it was time for him to move on despite the lack of a replacement.

Lukaku joined the Serie A club on Thursday, the Premier League's transfer deadline day, but there was no new arrival to take his place at Old Trafford before the window shut.

"It was time now for Romelu Lukaku to go. I think we got a good deal and he is happy so I think both parties ended that deal as it should be," Solskjaer told reporters on Friday.

"Romelu was injured for a while this pre-season and he did not participate so I just hope for him he will get a good start at Inter Milan."

The former Everton star fell out of favor under Solskjaer last season and he was training with the youth team at Anderlecht earlier this week as he tried to force his transfer away from United.

Lukaku's behavior was criticized in some quarters but Solskjaer insists there is no bad blood.

"I have always had a good relationship with Rom, open and honest. We have always spoken to each other frankly.

"I have no issue between me and Rom but we are now obviously very happy with who is here."

While Solskjaer suggested Lukaku's departure was inevitable, he will still be missed by United as no-one in the current squad comes close to matching his 42 goals in 96 appearances over the last two seasons.

Links with Juventus pair Paulo Dybala and Mario Mandzukic came to nothing, so Solskjaer has to go with what is already at his disposal.

Marcus Rashford is expected to lead the attack in their Premier League opener against Chelsea on Sunday, but there could be more opportunities for 17-year-old Mason Greenwood.

The youngster has impressed in pre-season and his manager expects him to become an integral part of the first-team squad.

Regardless of who features up front, Solskjaer believes there are enough goals in his team to challenge for a place in the top four.

"Of course Rom has a good record. The stats say he is one of the top number nines around when you want to play with that kind of target man striker," he said.

"But for me, I am very confident that we'll get goals from Anthony Martial and Marcus Rashford. Daniel James will create and Jesse Lingard will get more goals too.

"Mason Greenwood's pathway would have been a lot more different if we had another forward there.

"I believe Mason is going to be playing and involved a lot and when he is, he's going to score goals."

With Lukaku leaving Old Trafford, the door is now open again for Alexis Sanchez to prove his worth after a miserable 18-month spell in Manchester.

The chances of Chilean departing before September 2, when the last of the European transfer windows closes, are slim and although he is not yet ready for first-team action following this summer's Copa America Solskjaer insists there is still hope for Sanchez's United career.

"Alexis has come in and trained well although he is four or five weeks behind the other boys," he said.

"He has not played in any of the pre-season friendlies apart from one behind closed doors this week.

"I think he will see this as an opportunity to make his mark.

"I do expect him to stay. We think there is a striker there who is going to be able to get us some goals."