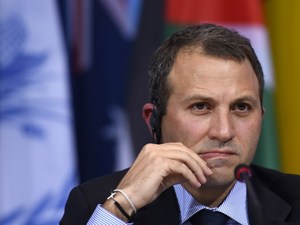 “I greet Muslims and Druze on the holy feast of Eid al-Adha and I condemn the storming of al-Aqsa and the beating of worshipers,” Bassil said in a tweet.

“I deplore the continued Arab and international silence over Israel’s crimes at the al-Aqsa mosque, specifically in Eid al-Adha,” the foreign minister added.

“International justice is one-eyed and the justice that is not won through international laws will be taken through the resilience and resistance of the peoples,” Bassil went on to say.

Israeli security forces and Palestinian worshippers clashed at the al-Aqsa compound on Sunday as overlapping Jewish and Muslim holidays led to tensions there, which resulted in the wounding of 61 Palestinians.

The voice of justice.

The FPM members were beaten and treated like criminals by the very same tugs that are their allies now.
Maybe Mr. Bassil should teach the Palestinians authority how to fraternize with the zionist state rather than inciting them to fight it and everybody will live happily ever after.