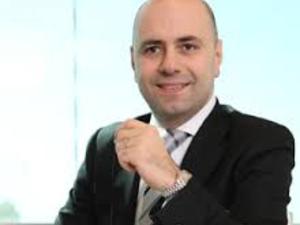 Deputy Prime Minister Ghassan Hasbani of the Lebanese Forces has noted that “through his actions and speeches, Foreign Minister Jebran Bassil seems to have started eying the stage that will come after this presidential tenure.”

“Bassil is the foreign minister of Lebanon and the head of a political movement. Period,” Hasbani said in an interview on al-Jadeed TV.

“If the Free Patriotic Movement’s ministers have accepted to sign their resignations and put them in Bassil’s hand, the LF will not give him a carte blanche… and it refuses to give a carte blanche for files marred by corruption,” Hasbani added.

“We have responded through our steps and approach towards the files and the responses should not be through screaming,” the deputy PM went on to say, noting that the electricity file “is now being approached in a new way.”

It is normal you are unfamiliar with who he is. You are more familiar with the Iranian government and its members.

Why do you talk and focus on an era we weren’t born? Might as well talk of the French mandate or the independence.

I thought you were older!

I just assumed most here were like me, born before the war!!

Nope, I was born under Israeli and Syrian occupation, technically we are still at war because Hizbala kept its weapons and uses them every now and then against Lebanon ... so you can say that anyone born after 1975 (1973 some would say) and till 2019 are born during the war.

lol @ the shia 'Christian' of European parents and a deep and wide luv tunnel that is open to the public year-round.

“If the Free Patriotic Movement’s ministers have accepted to sign their resignations and put them in Bassil’s hand, the LF will not give him a carte blanche… and it refuses to give a carte blanche for files marred by corruption,” Hasbani added.

Sa7 noumik ya fotoum you already gave them the carte blanche ya albi you forgot who finally accepted Clown as the president?.... essentially the LF is about as influential moon winds on the surface of Mars!

Talk about geagea crimes. I and my friends personally got beaten when we were 16 from the lebanese forces because we happened to go to a school in west beirut.

Whatever nice rethoric he has now, he has blood on his hands, and should give back the LF to a Gemayel junior, inexperienced, but cleaner.