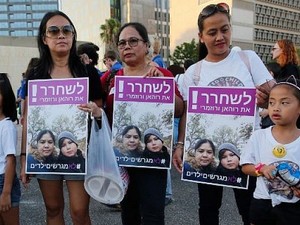 She is among some 600 workers from the Philippines who activists say could face deportation over a loss of residency status.

They include those who breached the conditions of their residency by starting families in the country.

The families and supporters say deporting the children to a country which they have never seen and whose languages they do not speak is a cruel policy.

Rosemarie Perez was arrested by immigration officials along with her 13-year-old son Rohan last week for remaining in the country illegally.

They had been taken to Ben-Gurion airport near Tel Aviv on Sunday night after an appeals court upheld their deportation, Beth Franco of the United Children of Israel (UCI) association said.

But they were taken off the plane after their lawyer requested an urgent hearing on their status in a bid to have them remain in Israel.

On Monday evening, they were escorted to Ben-Gurion airport where they were put on a flight to Bangkok for onward connection to Manila, Franco said.

Israel's immigration authority confirmed in a statement they had been deported, adding Perez had been in the country illegally for 12 years and that all court appeals had been exhausted.

Last week, migrants, their children and Israeli supporters held a protest in Tel Aviv against the policy of deporting Israeli-born children of migrants.

Many of the 28,000 -- largely Christian -- Filipinos in Israel arrived to work as caregivers and home help, but according to UCI, some 600 families could now face expulsion.

Their visas were conditioned on the requirement that they do not start a family in the country apart from certain exceptions, the association says.

The issue has particular resonance in Israel, where there are long-term fears about maintaining a Jewish majority in the country which was founded as a national homeland for Jews.

The Philippines is beautiful... way nicer than the Middle East. All they need is higher income to live the Life.