Hasan Assures Patriarch on Treatment of Detainees Held with ISF 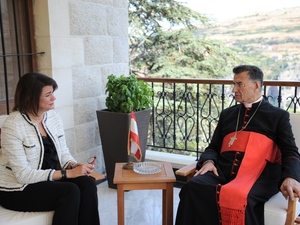 Maronite Patriarch Beshara al-Rahi held a meeting with Interior Minister Raya al-Hasan in the summer patriarchal residence located in Dimane where discussion focused on Rahi’s position regarding the ISF’s “practices” with detainees, the National News Agency reported on Tuesday.

“The visit is to reassure the Patriarch and to congratulate him on the occasion of the feast of Our Lady, and to clarify the reason that made him question the practices of the (Internal Security Forces) Information Branch towards the detainees,” said Hasan.

The Minister added: “I assured the Patriarch that the Branch does not target any sect or party but carries out its duties with transparency and professionalism. I also handed him a report with evidence that our detainees are not subject to any kind of torture or abuse.”

The Patriarch recently expressed woes about the ISF Information Branch accusing it of “fabricating files against a group of one religion and one sect” and “torturing people in its cellars”.

"The Information Branch is conducting large-scale pre-emptive operations, seeing its results on the ground and how the security situation is stable,” added Hasan.

She stressed the need not to involve the security apparatuses “starting with the armed forces, the State Security, General Security and ISF in the political conflicts because it harms the Lebanese, Christians and Muslims alike.”

But weirdly, good system of checks and balances with patriarch ensuring no torture.