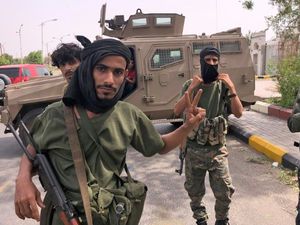 Riyadh and Abu Dhabi put on a display of unity over Yemen, but the capture of Aden by UAE-backed separatists exposes simmering divisions that analysts say weaken their joint campaign against Iran-linked rebels.

The seizure of the presidential palace in the southern port city on Saturday dealt a fresh blow to Saudi Arabia, which has led a costly four-year military intervention that has failed to defeat the Huthi rebels while triggering a humanitarian crisis.

The deadly bout of fighting in Yemen's already convoluted conflict pits Saudi-backed government forces against the UAE-trained Security Belt Force -– both allied against the Huthis.

With handshakes and smiles, the crown prince of Abu Dhabi held talks with Saudi leaders near Mecca on Monday, backing Riyadh's calls for dialogue between the warring parties.

But beneath the bonhomie lurked divisions that are fuelling the infighting and weakening the campaign to uproot the Huthis, who control vast swathes of Yemen, including the capital Sanaa, analysts say.

"If the Saudis need to win the fight against Iran-backed Huthis, they will need to encourage ceasefire and reconciliation between the government and the separatists."

Four and a half years of war against the common Huthi foe have exposed the divergent ambitions of the partners in the coalition.

The United Arab Emirates –- which in July announced it was scaling down its military presence in Yemen amid Gulf tensions with Iran -– has long viewed southern Yemen as a vital base to expand its political footprint in the Red Sea and the Horn of Africa.

The UAE has recruited and trained thousands of separatists, who seek renewed independence for the south.

Its larger neighbour Saudi Arabia views the Huthis as an existential threat, likening the rebels to a Hezbollah-like force in its backyard.

Yemen has emerged as Riyadh's proxy battleground with Tehran as the rebels step up drone and missile attacks on Saudi cities.

"A key Saudi frustration with the UAE will be something they cannot resolve –- for the UAE, Yemen was a war of choice, for Saudi Arabia, it isn't," said Ryan Bohl, of US geopolitical think tank Stratfor.

"That basic strategic difference was always going to create friction."

The UAE's military drawdown is another development that appears to have left Riyadh isolated in Yemen, despite assurances from Abu Dhabi that it is only a tactical retreat, not a full withdrawal.

"It is a huge blow to Saudi Arabia's coalition in Yemen and it will be difficult for Riyadh to replace the UAE," said Olivier Guitta, managing director of GlobalStrat, a geopolitical risk consultancy firm.

As Iran tensions increase the risk of a regional conflict, "the UAE has clearly gone down a couple of notches regarding its anti-Iran rhetoric in the past few weeks."

But Riyadh needs the UAE's support to bring the southern secessionists to the negotiating table.

The Saudi foreign ministry said it has invited all warring parties for urgent talks in the kingdom.

The separatists say they are open to dialogue and de-escalation.

Saudi deputy defence minister Prince Khalid bin Salman has warned the infighting could be exploited not just the Huthis but also by other groups active in Yemen like Al-Qaeda and Islamic State.

The potential security vacuum also exacerbates the risk of Western weapons falling into the hands of local armed groups -- especially after the US Senate last month failed to prevent the controversial sale of $8.1 billion in weapons to Saudi Arabia.

"There have been end-use monitoring concerns raised about Saudi Arabia and the UAE transferring US weapons to various factions in Yemen, particularly the southern separatists," said Becca Wasser, a policy analyst at the US-based RAND Corporation.

The Gulf states dismiss the concerns, but the hasty retreat of Saudi-armed government forces from Aden is likely to reignite concerns that their weapons could have fall into the hands of separatists.

"Regarding Saudi Arabia in Yemen, the best outcome they can hope for is a draw," said Guitta.

"A victory should have happened in the first year (of their intervention). Now it is turning into a quagmire a la Vietnam."

Then they wonder why the ottomans had their boot on their necks for 5 centuries. This tribal mentality will cause their loss.

If the Iran model, democracy, contaminates the Arab world, all hope for a reunion with the mother ship hidden on the dark side of the moon will be lost.