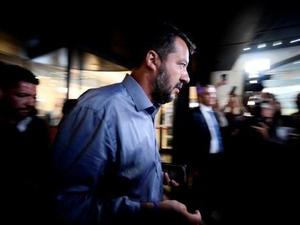 Italian senators will on Tuesday try to hammer out agreement on a possible no-confidence vote in Prime Minister Giuseppe Conte's government after far-right leader Matteo Salvini pulled the plug on the teetering coalition.

Senators have been recalled at the height of the holiday season after the heads of political groupings in the house on Monday failed to agree on a timetable for the vote demanded by Interior Minister Salvini.

He called last week for swift elections after withdrawing the support of his anti-immigration League party from an increasingly acrimonious alliance with the anti-establishment Five Star Movement (M5S), plunging the country into turmoil.

While the government is still in place, the Senate must decide whether to initiate a no-confidence vote in the 14-month-old administration of Conte, an independent agreed to by deputy prime ministers Salvini and M5S leader Luigi Di Maio last year.

Thursday is the Catholic Feast of the Assumption or Ferragosto, a bank holiday that traditionally marks the peak of Italians' holiday season, and it is not clear how many senators will make it back to Rome for the vote.

They will meet from 1600 GMT on Tuesday to debate a range of motions, including the Conte no-confidence vote and whether the premier should address the Senate on the crisis on August 20 instead.

Together the M5S and the opposition Democratic Party (PD) have enough votes to approve the latter motion, potentially thwarting Salvini's bid to bring down the government.

The PD is also expected to table a no-confidence motion in Salvini, who wants a vote on Conte as early as Wednesday and for elections to follow in October to capitalise on opinion polls suggesting the League could garner 36-38 percent of votes.

Populist leader Salvini effectively ended the ruling alliance on Thursday, saying afterwards he had had enough of working with the M5S and what he said was its refusal to collaborate on key issues.

The two parties have seen a stunning reversal of fortunes since forming a government after the M5S won more than 32 percent of votes and the League 17 percent in 2018.

The social media-loving Salvini has been burnishing his "man of the people" image through a series of beach selfies in swimming trunks in recent days, seeking to build on the League's strong showing in May's European Parliament elections when the party won 34 percent of the vote, twice that of the M5S.

But the M5S is among those opposed to swift elections, with Di Maio calling for parliament first to implement a planned parliamentary reform which would slash the number of lawmakers from 950 to 605, potentially diluting the League's power.

The M5S, PD and other parties could support a transitional government to pass the parliamentary reform and next year's budget to avoid an automatic rise in VAT which would hit the least well-off the hardest.

However, the PD is also riven with divisions between those loyal to Matteo Renzi, premier from 2014-16, and supporters of current party leader Nicola Zingaretti, with talk of the party splitting.

Both the PD and M5S are divided on whether to form an improvised alliance with each other, something the PD refused to do after last May's elections, prompting the unwieldy M5S-League alliance.

Di Maio on Monday said "no one wants to sit at the table with Renzi."

Salvini is also seeking allies, both in the Senate and for possible elections, in the form of former premier Silvio Berlusconi's Forza Italia and the post-fascist Brothers of Italy of Giorgia Meloni.

While those two parties might each win six to eight percent of votes in an election, they will not be able to provide enough support in the Senate.

The three rightwing parties hold 137 of the 315 Senate seats, while the M5S and PD together have 158.

"The political geography we were used to is going to explode," wrote an editorialist in Tuesday's left-leaning La Repubblica newspaper.

Citizens "are reduced to the rank of spectators, applauding the new swimsuit-wearing politics in the square, without realising that their selfies are in fact part of a change in era."