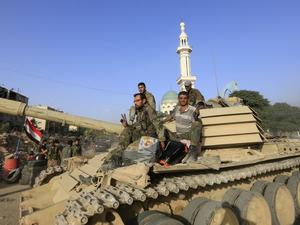 The Britain-based Syrian Observatory for Human Rights, an opposition-linked war monitoring group, says Syrian troops captured the villages of Tel Aas and Kfar Eean early on Wednesday. The villages are just west of the rebel stronghold of Khan Sheikhoun.

Syrian troops have been on the offensive against main rebel strongholds in the north of Hama province and the southern districts of Idlib, the last major concentrations of rebels in the country.

Over the past days, troops have intensified their offensive, capturing the town of Habeet on Sunday.