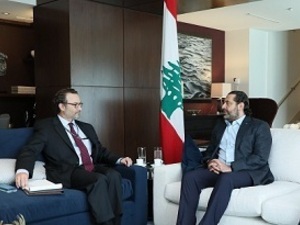 Hariri held two preparatory meetings with Schenker and Hill at his residence at the Four Seasons Hotel in the US capital in the presence of former Minister Ghattas Khoury concerning the issues that will be discussed at today's meeting.

Hariri also received former Senator Joe Lieberman and will meet today with World Bank President David Malpass to discuss the Bank's relationship with Lebanon and the projects it finances.

so he couldn't wear a tie and make himself look more respectable?