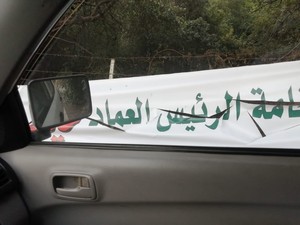 The Lebanese Democratic Party and Progressive Socialist Party denounced in a statement on Friday the torn down banners welcoming President Michel Aoun in the Druze majority Chouf district.

The LDP’s media office issued a statement denouncing the act saying banners stretching along the road from Multaka al Nahrain to the junction of the town of Jahlieh were all pulled apart. “These acts do not represent the values, customs or history of the people of the Mountain area,” said the statement.

Media Commissioner in the Progressive Socialist Party, Rami Rayyes also condemned the act in a tweet describing it as “suspicious” and “aiming to confuse the position of the PSP welcoming Aoun in Beiteddine,” he said.

Rayyes stated that a PSP delegation will visit the President as a welcoming gesture to his summer residence in Beiteddine.

Aoun is scheduled to move to the summer presidential residence in Beiteddine in Chouf on Friday.

Last month, a deadly incident in the Aley town of Qabrshmoun in the Mountain area sent tensions high between the LDP--an ally of the Free Patriotic Movement of Aoun-- and Progressive Socialist Party of Druze leader ex-MP Walid Jumblat.