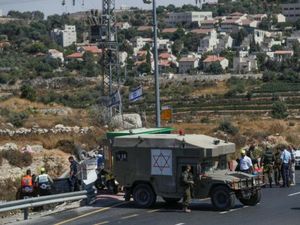 Two Israelis were injured Friday in what the Israeli army called a "terrorist" car-ramming attack near the Jewish settlement of Elazar south of Bethlehem in the occupied West Bank.

"The civilians were injured and evacuated to hospital for medical treatment. The terrorist was neutralized," it said.

A police statement said an off-duty policeman passing by the scene near Elazar settlement saw the alleged attacker trying to exit his vehicle, and fired at him.

An army spokeswoman contacted by AFP could not immediately say if the suspect was alive or dead.

A 17-year old Israeli was taken to Jerusalem's Hadassah hospital in grave condition and put on a respirator, a hospital spokeswoman said.

Last week, an off-duty Israeli soldier was stabbed to death in the same area. Two Palestinian suspects were later arrested.