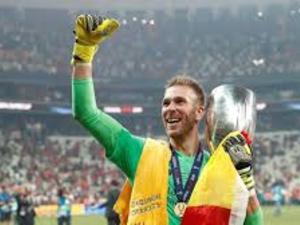 Liverpool goalkeeper Adrian faces a late fitness test to see if he can face Southampton on Saturday after being injured by a pitch invader during celebrations of Wednesday's UEFA Super Cup win over Chelsea.

The Spaniard, who only joined the European champions on August 5, capped his full debut in style by saving Tammy Abraham's penalty to win Liverpool a shootout 5-4 following a 2-2 draw in Istanbul.

However, Adrian's ankle was injured when a fan ran on the pitch to join in the shootout celebrations and went careering into a huddle of Liverpool players when he slipped on the pitch.

"I really don’t understand it why, in the world of social media where you are all on it, when we were all together a supporter jumped over something, was chased by some security guys, slipped and kicked (Adrian’s) ankle. Crazy," said Liverpool manager Jurgen Klopp.

"Yesterday it was swollen. Today I spoke to him and he said it is better, much better than yesterday, but we have to see.

“He could not have played directly after we landed in Liverpool, but I saw him now, he is ok and it looks better, but the decision will be made tomorrow –- there is no chance to make it early."

Liverpool are already without normal number one Alisson Becker due to a calf injury picked up in the Premier League season opener against Norwich and could have to cope without the Brazilian for up to two months.

Should Adrian not be fit, 35-year-old Andy Lonergan, who was released by Middlesbrough last season and only signed a short-term contract with Liverpool this week in the wake of Alisson's injury, could start at St. Mary's.