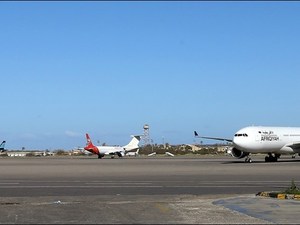 Three people were wounded in raids by forces loyal to strongman Khalifa Haftar against two airports controlled by the unity government in northern Libya, the U.N.-recognized government said Friday.

Tripoli's sole functioning airport Mitiga and Zuwara airfield were targeted for the second time in less than 48 hours -- the former hit overnight Thursday and the latter on Friday morning.

Airport management at Mitiga reported rocket fire against the runway "as planes took off and landed."

The U.N.-recognized Government of National Accord (GNA) said on Facebook that Haftar's forces "targeted employees of the airport services company" at Mitiga with Grad missiles, causing shrapnel wounds to two workers and damaging a bus.

Flights were temporarily suspended or rerouted to Misrata, 200 kilometers (120 miles) east of Tripoli.

In the attack against Zuwara airfield, Haftar's self-styled Libyan National Army said it targeted a hangar "which houses Turkish drones and their ammunition."

The Tripoli-based GNA said a member of civil protection was wounded in that attack.

The country's biggest petrochemical complex is located there, near the Tunisian border.

Forces loyal to the GNA and the LNA are embroiled in a stalemate in Tripoli's southern outskirts, after Haftar launched an offensive against the capital in April.

Fighting over the last four months has killed 1,093 people and wounded 5,752, according to the World Health Organization.

Some 120,000 have been displaced over the same period.

Libya has been mired in chaos since a NATO-backed uprising that toppled and killed dictator Moammar Gadhafi in 2011.