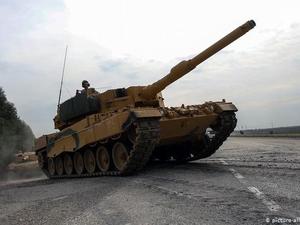 A U.S.-Turkey operations center aimed at creating a safe zone in northern Syria to manage tensions between Ankara and a U.S.-backed Kurdish militia will be fully operational next week,  the Turkish defense minister said Friday.

"We have reached a general agreement on the coordination and control of air space and on numerous other matters," Defense Minister Hulusi Akar said during a visit to the southeastern province of Sanliurfa where he inspected troops chosen to participate in the new scheme.

The joint center, agreed last week after days of tense negotiations, "will be working at full capacity from next week," Akar said on his website.

A US delegation has been at work in Sanliurfa since Monday.

The joint operations center will help organize a "safe zone" in northern Syria aimed at creating a buffer between the Turkish border and areas controlled by the Kurdish People's Protection Units (YPG) in northern Syria.

Turkey has repeatedly threatened to launch an assault east of the Euphrates river against the YPG, which it says is a "terrorist" offshoot of the outlawed Kurdistan Workers' Party (PKK), which has waged an insurgency inside Turkey since 1984.

But Washington has worked closely with the YPG in the fight against the Islamic State (IS) group.

Little is known about the size of the safe zone and how it will work, but Turkey's Foreign Minister Mevlut Cavusoglu said Thursday that there would be observation posts and joint patrols.

He said U.S. President Donald Trump had previously promised it would be 32 kilometers (20 miles) wide.

The timetable agreed with Washington has so far been honored, said Akar, adding that "we expect that to continue."

Turkey has the highest number of Syrian refugees in the world at more than 3.6 million, and has faced increasing pressure domestically to speed up repatriations to peaceful parts of the country.

It has twice carried out unilateral offensives into northern Syria against the Islamic State group and YPG, in 2016 and 2018.