Hariri: UN, US Will Participate in Negotiations on Maritime Borders 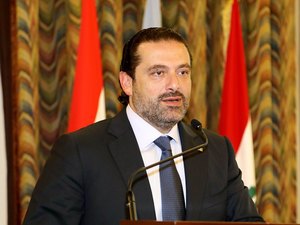 Prime Minister Saad Hariri said that he heard support from the US administration for the Lebanese army, pointing out that US Secretary of State Mike Pompeo renewed during their meeting the US support for Lebanon politically and economically and the US keenness on resolving the land and maritime border demarcation issue. He said the US assistance to the Lebanese army continues and “we are negotiating the financial and economic assistance”.

Hariri’s stances came during a discussion with Arab correspondents in Washington after his meeting with Pompeo. He said the relationship between Lebanon and the United States is very important especially in terms of assistance it is giving in the displaced file and assistance for the Lebanese army and security forces.

He said: “We also seek to develop this relationship as there will be investments by US companies in Lebanon in the fields of oil, gas, electricity and others, and we are working on the issue of land and sea borders, so that we can begin negotiations. They have remarks on Lebanon linked to Hizbullah. There are sanctions threatening Lebanon. But it is my duty as prime minister to spare the Lebanese state these sanctions and to avoid any impact on the Lebanese economy. In this sense, we are keen to maintain continuous contact with the US administration. These meetings were also an occasion to talk about what is happening in the region, whether in the Gulf countries or in Syria, and we exchanged views on these matters.”

On the US sanctions against Hizbullah, Hariri said: “We cannot change the view of the American administration regarding these sanctions, but what we are trying to do is to spare Lebanon any consequences in this regard.”

He added: “In my opinion these sanctions are not useful but they will certainly be tough on everything related to Iran, and on those who help it and communicate with it. We explained to them our point of view that Lebanon should be spared the consequences of these sanctions, and I think our message has been well received.”

As to whether the sanctions will affect Lebanese banks or financial institutions, Hariri said: “Everyone knows that the Americans issue their sanctions lists without any prior notification to the Lebanese state. There may be several queries about a specific institution or another, but I am sure that there is nothing tangible yet.

“There was a precedent with the Lebanese Canadian Bank and we dealt with it as necessary, but there is too much intimidation in this subject. In fact I heard praise from all the officials I met in the United States about the policy of the Central Bank and its Governor Riad Salame, but if there are any observations, we know how to deal with them.”

As for the possibility of sanctions targeting Hizbullah allies, Hariri said: “This talk takes place in the congress and last year there was an attempt to prepare such a text, but I don’t think we will reach this point.”

About the US administration’s position as per the performance of the Lebanese government, mainly on the issue of Hizbullah missile factories, the PM said: “We are trying to find the best way to avoid putting Lebanon in danger. It is not our role to play police for the Israelis. If we look at UNSCR 1701, we find that if there is a breach by Lebanon, in return the Israeli side violates the Lebanese airspace hundreds of times a day. We in Lebanon are working seriously, according to 1701, to move from the cessation of hostilities to ceasefire. For this to happen, a number of items must be applied, part of which relates to us, and the other part relates to them. But until now we don’t see any implementation from their side. The most important thing is to get negotiations started on the maritime borders, it is very important for Lebanon economically in terms of gas and oil. This issue is vital and important to us and perhaps to them too.”

In response whether negotiations would begin in September, Hariri said: “We are holding serious talks, we made a lot of progress on several issues, and now we must reach a result.”

About who will lead the negotiations with Israelis after David Satterfield, Hariri said: “We don’t know yet, but we know that it is crucial for the mechanism to be developed under the auspices of the United Nations.”

With regard to the alliance between Israel, Cyprus and Greece on the subject of oil, and Lebanon's position on this, he said: “We spoke to Cyprus and we will not relinquish our interests, nor will they. There has been talk about this issue, but so far this alliance does not exist, because the Turks oppose it, and the Cypriots have not fully made their mind on it.”

About what is required from the Lebanese government regarding Hizbullah, he said: “We have to deal strictly with any person or institution on the list of sanctions in order to protect our banks.”

Asked if there is an American request to tighten procedures at the ports to prevent smuggling, Hariri said: “In the 2020 budget we agreed to place scanners on land and sea ports because we have a policy to stop smuggling since our economy is very much affected. Illegal crossings will be closed, and any smuggling attempt through the airport or land crossings will be caught by the scanners. There is a draft project in this regard with the Minister of Finance that will be submitted to the Cabinet.”

Asked whether he heard any criticism of the Lebanese army's position in the south, Hariri said: “On the contrary, I only heard support for the Lebanese army. The US assistance to the military continues and we are now negotiating the financial and economic assistance.”

About the participation of American companies in the implementation of CEDRE projects, Hariri said: “On the issue of electricity they are interested in participating. We also urged American companies to participate in the oil tenders, mainly that geological studies confirm a great possibility that we have oil.”

About the Americans view of the obstacles facing the Lebanese government’s work, Hariri said: “Unfortunately, we are our own enemies. We need to work 24 hours a day to run projects and implement CEDRE and the McKinsey Plan, but instead we are creating political problems and disrupting the country. There is no doubt that any country, not just the United States, would be disappointed.”

As for reports about security threats against anti-Hizbullah figures, especially leader of the Progressive Socialist Party Walid Jumblat, Hariri said: “Whoever attacks Walid Jumblatt would be attacking me personally and Speaker Berri. But I do not think that he is targeted and whoever thinks so wants to take the country to a civil war.”

Whether there is pressure on the judiciary in Lebanon, he said: “We have problems in the judiciary, this is undeniable. But we also have honest judges who refuse interferences in any decision they take.”

On the other hand, Hariri noted that the issue of the displaced and their return to their country was discussed, and the return requires several steps from the Syrian regime, first of all the general amnesty.

About Lebanon’s relation with the Gulf states in general and Saudi Arabia in particular, he said: “Today, we are working with Saudi Arabia to achieve 23 joint economic agreements, work is also underway with the UAE. The relationship between us has returned to what it was before and maybe better, there are continued contacts with Saudi Arabia and the Gulf on the important issues.”