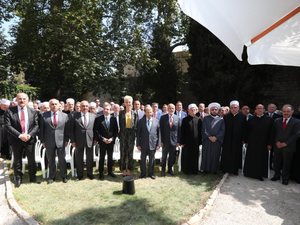 President Michel Aoun received at the summer presidential residence in Beiteddine a delegation of the Progressive Socialist Party dispatched by Druze leader Walid Jumblat who is outside the country, the National News Agency reported on Saturday.

Education Minister Akram Shehayyeb said that Jumblat has tasked the delegation to present “endearment and welcome Aoun at the summer presidential residence in Beiteddine.”

For his part, Aoun said he was glad to be in the Chouf district and Beiteddine, he said: “I am also glad that we were able to get out of the unfortunate incident that took place in Qabrshmoun. We have sought a lot to remove its traumatic effects, which we hope will be completely eliminated in a short time.”

He added: “The fundamental reconciliation that has taken place will not be shaken even if we differ politically. Political differences are normal in a democratic system, but it is not a difference on the homeland.”

The President moved to Beiteddine on Friday in a move described as “reinstating” the reconciliation he led at Baabda Palace between Jumblat and Lebanese Democratic Party leader MP Talal Arslan against the backdrop of Qabrshmoun incident.