3 Killed as Israel Fires on 'Armed' Gazans after Rocket Attack 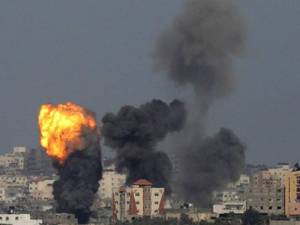 Israel said it opened fire on armed Palestinians on Gaza's border overnight and Hamas's health ministry reported three dead Sunday, the latest in a series of incidents along the tense barrier.

Israel's tank and helicopter fire came after Palestinian militants in the Gaza Strip fired three rockets at Israel late Saturday, the army said, the second such attack in 24 hours.

Two rockets were intercepted by Israel's air defense systems, it said, without specifying what happened to the third.

Police reported no casualties in Israel, but said a rocket fragment fell on a house in the southern Israeli town of Sderot.

Israeli medics said they had treated six people, including two with minor injuries sustained while running to bomb shelters and four others with panic attacks.

It added that an "attack helicopter and a tank fired towards them."

The health ministry in the Palestinian enclave run by Islamist movement Hamas reported three dead and said another Palestinian was hospitalized following the incident north of Beit Lahia.

A series of incidents along the Gaza border have tested a fragile truce between Hamas and Israel in recent days.

On Friday night, a rocket was fired from Gaza into Israel and was intercepted by missile defense systems.

Israel said in response it carried out strikes on two Hamas "underground targets" in the northern and central Gaza Strip, without providing further details.

A Gaza security source reported three Israeli strikes on a Hamas observation post, an unidentified target near Gaza City and one that hit open ground in the central part of the enclave.

No casualties were reported.

The rocket fire and retaliation came after a series of other incidents along the Gaza border since the start of the month.

A week ago, a Palestinian shot at Israeli soldiers along the frontier and was killed when troops returned fire, the army and Hamas's health ministry said.

A day before that, Israel's army said its troops shot dead four heavily armed Palestinians on the border, adding one had managed to cross and throw a grenade at soldiers.

Earlier on August 1, a Palestinian seeking to avenge his brother's death by Israeli fire entered Israel from Gaza and opened fire on soldiers, the army said.

Three Israeli soldiers were wounded and the Palestinian was killed, the army said.

Regular protests and clashes erupted along the border of the blockaded Gaza Strip in March 2018.

At least 305 Palestinians have been killed by Israeli fire in Gaza or the border area since then, the majority during demonstrations and clashes.

Seven Israelis have also been killed in Gaza-related violence over the same period.

Israeli Prime Minister Benjamin Netanyahu is widely seen as wanting to avoid an escalation in the Gaza Strip before September 17 elections, but he also faces heavy political pressure to respond firmly.

Israel and Palestinian militants in Gaza, including Hamas, have fought three wars since 2008.