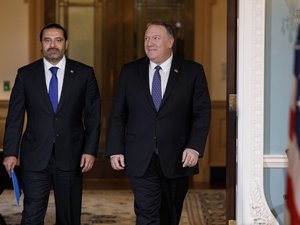 Prime Minister Saad Hariri and his wife Lara hosted at their ranch near Washington DC the U.S. Secretary of State Mike Pompeo and his wife for a lunch banquet, Hariri's press office said on Sunday.

On Friday, Hariri said that he heard from the U.S. administration its support for the Lebanese Army, adding that Pompeo renewed during his meeting with him Thursday his country's support for Lebanon politically and economically and the U.S. keenness to continue to work on resolving the land and sea borders demarcation issue.

He has a ranch near Washington DC, yet he has hundreds if not thousands of employees who have not been paid for years.

The last time a Hariri hosted a US administration official away from Hezbollahs eyes and ears, he ended up in a pile of ubble near the St Georges hotel in Beirut. So, please take care Saad. For all your mistakes and weaknesses, you are still better than most sunni alternatives.