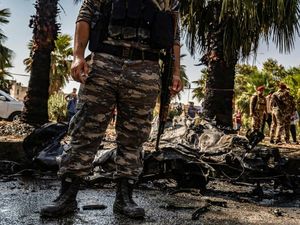 A car bomb killed a police officer and wounded two other people Sunday in the Kurdish-majority city of Qamishli in northeast Syria, police said, the second such attack in just over a month.

Kurdish police spokesman Ali al-Hassan said the car bomb was detonated by "remote control" near a school, "killing a member of our (police) forces."

An AFP correspondent at the scene said the car exploded as a Kurdish police patrol drove by, not far from a Syrian army position.

Firefighters rushed to the scene to put out a blaze that spread from the vehicle to nearby trees, the correspondent said, adding that debris and traces of blood littered the ground.

The Britain-based Syrian Observatory for Human Rights war monitor reported that a member of the Kurdish Asayesh security forces was killed in the bombing.

There was no immediate claim of responsibility for the attack, the latest to hit Kurdish-held areas of northeast Syria.

In July a car bombing near a church in Qamishli wounded several people. Another one in June near Kurdish security offices in the city injured seven people, including a child.

Syria's Kurds have led the US-backed fight in the war-torn country against the Islamic State group, which continues to claim attacks despite losing its last patch of territory earlier this year.

The jihadists have vowed to avenge their defeat at the hands of Kurdish-led forces and maintain a presence in Syria's vast Badia desert as well as in the east and northeast of the country.

Kurdish forces control most of Qamishli while Syrian government troops are deployed in the city's Arab quarters and around the airport.