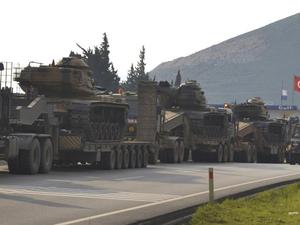 A Turkish military convoy crossed into jihadist-run northwest Syria Monday, sending tensions soaring between Damascus and rebel-backer Ankara which said its forces were targeted with an air strike.

The Syrian government reacted angrily after the convoy entered Idlib province and headed towards a key town where regime forces are waging fierce battles with jihadists and rebels.

After eight years of civil war, the jihadist-run Idlib region on the border with Turkey is the last major stronghold of opposition to President Bashar al-Assad's regime.

The region of some three million people was supposed to be protected by a Turkish-Russian buffer zone deal signed last year, but instead regime and Russian forces have upped their deadly bombardment of the bastion since late April.

Following days of inching forward on the ground, Russian-backed regime forces on Sunday took control of the edges of the town of Khan Sheikhun in the south of the stronghold.

On Monday, an AFP correspondent saw a military convoy of around 50 armored vehicles including personnel carriers and at least five tanks travelling southwards through Idlib province.

Turkey's defense ministry "strongly" condemned the attack, which it said had killed three civilians and wounded 12.

The Damascus regime meanwhile denounced the convoy's crossing over from Turkey.

"Turkish vehicles loaded with munitions... are heading towards Khan Sheikhun to help the terrorists," a foreign ministry source said, using the regime's blanket term for Turkish-backed rebels and jihadists.

This confirmed "the support provided by the Turkish regime to terrorist groups," state news agency SANA reported the source as saying.

On Monday afternoon, the AFP correspondent saw the convoy stop on the Aleppo-Damascus highway in the village of Maar Hattat, just north of Khan Sheikhun.

Warplanes and helicopter machine guns targeted nearby areas, he said.

The AFP correspondent saw the convoy pause briefly outside the town.

After the convoy made it inside the town, Russian and Syrian warplanes targeted its outskirts in an apparent "attempt to prevent the convoy from advancing," Observatory chief Rami Abdel Rahman said.

Fighting continues to the east and west of the town, the Observatory says.

Any seizure of Khan Sheikhun and territory further east would encircle a patch of countryside to its south, including the town of Morek that is home to a key Turkish observation post.

It would also see the regime secure a position on a key highway connecting government-held Damascus with the northern city of Aleppo, which the regime retook from rebels in December 2016.

Naji Mustafa, a spokesman for the National Liberation Front rebel grouping, told AFP: "The Turkish reinforcements were headed to... Morek."

Analyst Nawar Oliver said the latest developments in Khan Sheikhun were likely linked to a "disagreement" between both signatories.

He said Turkey sending troops was likely due to "it not being ready for the security of its troops to be threatened, or for their destiny to become at the mercy of the regime and Russia."

It could also be a "Turkish decision to protect Khan Sheikhun," he said.

Since late April, the regime and Russia have upped their bombardment of the Idlib region, killing more than 860 civilians.

More than 400,000 people have fled their homes, the United Nations said.

Jihadist group Hayat Tahrir al-Sham, led by Syria's former al-Qaida affiliate, controls most of Idlib province as well as parts of the neighboring provinces of Hama, Aleppo and Latakia.

Syria's war has killed more than 370,000 people and displaced millions since it started in 2011.