Young Libyans Chose Danger at Sea over Peril at Home 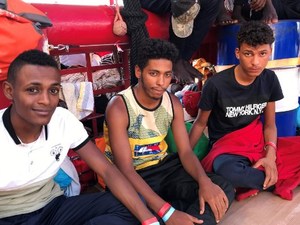 For three young Libyans plucked from a deflating dingy in the Mediterranean, the perils of trying to cross the sea were still preferable to what they had left behind in their war-torn home.

Salah, Khalil and Ibrahim, aged between 19 and 22, sat in a corner of the Ocean Viking vessel operated by SOS Mediterranee and Doctors without Borders as it waited for permission to dock at a port.

They sat apart from other migrants from Sudan, Chad, Ethiopia, Senegal and the Ivory Coast who have fled torture and abuse in Libya where most of them had gone to seek work.

"I had no idea how dangerous the sea could be," says Khalil, 20.

"But Libya is collapsing -- you cannot live there," he adds, pulling an imaginary trigger.

Before he fled Libya, Khalil was a taxi driver.

While driving the route from Sabha, his hometown in the center to the eastern city of Benghazi, he was stopped by militia loyal to Khalifa Haftar, a strongman who holds sway in the region.

He said he was thrown into prison where he languished for three months alongside hundreds of others and was beaten daily, pointing to a scar in the corner of his mouth.

He later made a break for freedom with about 15 fellow prisoners, running the gauntlet of their jailers who fired on them as they fled.

Luca, the ship's doctor who removed the bullets embedded in Khalil's body, says such wounds are nothing new among those fleeing from conflict areas.

With his taxi taken from him, Khalil returned to his family. "I just wanted to live a normal life," he said.

But a month later fighting broke out in his town and his mother told him to flee.

"She had no idea of how dangerous the crossing could be," Khalil says. "Neither did I. I was happy to try the sea."

But by the time he was rescued by Doctors without Borders on August 12, the blue rubber dingy he was sharing with 104 others was on the verge of sinking.

Nineteen-year-old Salah joined the forces of the Government of National Accord of Fayez-al-Sarraj. But he soon realized that he was not cut out for war.

"If I had stayed, I would have been killed -- either by Sarraj's men for fleeing, or by Haftar's men for fighting for Sarraj," he said.

He got a number from a Sudanese, and left the same day -- with just time for one last selfie with his family.

Ibrahim's reason for fleeing was the color of his skin.

"My father was black -- he is dead. My uncle died in the fighting. My school was bombed. My mother said to me 'Libya is not a country for you'."

"My Sudanese friends were like a family to me. One from Darfur was killed right in front of me as we were on our way to play football," he said.

"I didn't want to fight. I was terrified on that blue boat, but Libya is more dangerous than our sunken vessel."