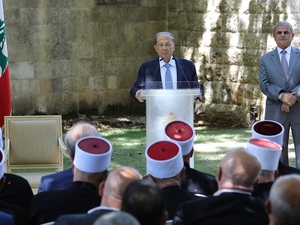 President Michel Aoun on Monday pledged developmental projects for the Chouf and Aley regions as he stressed the importance of Christian-Druze unity there.

“Lebanon cannot be united without the unity of Mount Lebanon, which is characterized by its Druze and Christian wings,” Aoun said in a meeting with Arab Tawhid Party chief Wiam Wahhab and a Druze delegation at the summer presidential palace in Beiteddine.

“I’m not saying this to belittle the rest of the components,” he noted.

And telling the delegation that he shares their “dreams,” the president emphasized “the need to earmark developmental projects for Mount Lebanon.”

“I promise you to consolidate your presence in your regions and villages and I know how to fulfill the promise,” Aoun went on to say.

Never has Lebanon known or seen an iranian president who stresses unity as much as this one, ever!

Did he not vow to provide basic service, a strong economy, a Lebanese identity and free Lebanese held prisoners in Syria? Anytime now he will also promise free haircuts and a lollipop for each Citzen too! After all he delvers on everyone of his words loooool. I still remember his promise never to leave B3abda and his troops back in the day.....