'Environmental Tragedy' as Canary Islands Fire Out of Control 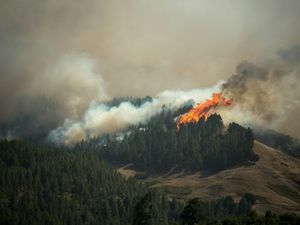 A fire raged out of control on the Spanish holiday island of Gran Canaria on Monday, forcing evacuations as flames rose so high even water-dropping planes could not operate in what was dubbed an "environmental tragedy."

The blaze, the third in 10 days in the mountainous center of the island, has forced the evacuation of several villages, which according to the census have a combined population of 9,000, a spokeswoman for the emergency services said.

The exact number of evacuees was unclear on the island that lies at the heart of the Canary archipelago off the coast of northwest Africa.

No fatalities have been reported and tourism on Gran Canaria, which boasts breathtaking views and is popular with foreigners, had not been affected.

Altogether, 1,000 firefighters and other crew and 14 water-dropping helicopters and planes were working on controlling the blaze, which has destroyed 6,000 hectares, according to emergency services.

More helicopters were planned to arrive on Tuesday.

This deployment of ground and air forces "is the biggest ever carried out in the Canaries and one of the biggest implemented in Spain in the past few years," said Agriculture Minister Luis Planas.

So fierce is the fire in what is part of a UNESCO biosphere reserve that in some areas, it "is beyond our extinction capacities," Federico Grillo, head of emergency services in Gran Canaria, said late Sunday.

On the northwestern flank of the blaze, flames have risen as high as 50 meters (160 feet), preventing ground crew from approaching or water-dropping aircraft from over-flying, the emergency services spokeswoman said.

She added around 100 people had been "confined" to the cultural center of Artenara, unable to leave this village in the disaster zone as all possible evacuation roads were too dangerous to take.

Planas said the next 48 hours would be "critical."

The fire broke out on Saturday afternoon, just days after another wildfire in the same region forced the evacuation of hundreds.

Lourdes Hernandez, an expert on wildfires at WWF, told AFP the blaze had entered the Tamadaba natural park, an untouched pine forest that represents "the main green lungs of the island."

The fire is also threatening the Inagua nature reserve, another area of major biodiversity.

Hernandez said scientists blamed the rapid propagation of the blazes to climate change, even if fires are often initially triggered by humans, intentionally or not.

"The virulence of the fire, the speed at which flames spread, the intensity of the fronts, mean that more extreme weather conditions are generated inside the fire and embers leap sometimes hundreds of meters away," she said.

"That's what is known as firestorms. And they're blazes that cannot be approached and cannot be extinguished" by firefighting forces.

The center of the island, the second-most populous of the Canary Islands, attracts hikers.

But a large majority of tourists who visit Gran Canaria stay in beach resorts.

In a statement, the Canary Islands government said the tourism industry on Gran Canaria remained unaffected "given that the fire is confined to upland areas", with no resorts impacted and no flight delays.

Torres said all firefighters were working "to contain the blaze in zones where it is heading to populated areas".

Planas added that the "maximum priority" was to "preserve human lives".

With its arid hot summers, Spain is frequently plagued by huge forest fires.