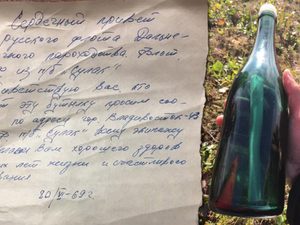 A man gathering firewood in Alaska discovered a bottle with a handwritten message inside wishing the finder "happy sailing" more than 50 years after it was dropped into the sea by a Russian sailor.

Tyler Ivanoff, a teacher's aide in Shishmaref, Alaska, spotted the bottle on the shore near his village, and pried off the plastic stopper with his teeth.

"It was still dry on the inside and still smelled like wine or whatever, old alcohol. The note was dry," he told the Nome Nugget newspaper.

Ivanoff posted a picture of the bottle and the note on Facebook on August 5.

But the yarn doesn't end there.

Rossiya 1, a Russian television network, tracked it by its return address in Vladivostok to a retired Soviet ship captain now living in Crimea.

Anatoly Botsanenko, interviewed by the station in a naval uniform, said he served on the Sulak in 1969 when he was 35.

Peering at the message on the reporter's smartphone, Botsanenko said, "That's not my handwriting." But he then recognized the return address as his old home in Vladivostok.

"It's pretty cool how a small photo grew into a story," Ivanoff posted on Facebook.