Yemen President Calls on Citizens to Back Govt over Separatists 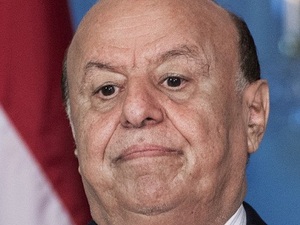 Yemeni President Abedrabbo Mansour Hadi called Monday on people to back his government over southern separatists, who took control of his administration's de-facto capital of Aden.

Hadi's statements were made during the first high-level government meeting after fighters of the so-called Security Belt Forces last week ousted loyalists from what was the capital of the formerly independent south, in clashes that left around 40 people dead.

Yemen's vice president, Ali Mohsen al-Ahmar, Prime Minister Moeen Abdulmalik Saeed, and both the ministers of interior and defense took part in the meeting in Riyadh.

Hadi has been based in the Saudi capital since fleeing Yemen in 2014, after Iran-aligned Huthi rebels ousted his government and took over the capital Sanaa.

Yemenis must "stand behind the legitimate leadership and its official state institutions and reject all destructive projects", Hadi said, according to the official Saba news agency.

He also ordered his government to "continuously convene to deal with the repercussions of this rebellion", calling on the separatist Southern Transitional Council (STC) to withdraw from positions they have taken over.

Both the STC and government forces have been fighting the Huthi rebels in the years-long war that has pushed the country to the brink of famine.

But the two forces remain at odds, sentiments that fueled the STC's dramatic occupation of key positions in Aden, before a partial withdrawal under pressure from regional powers Saudi Arabia and the United Arab Emirates.

On Monday, the spokesman for the Saudi-led coalition backing the Yemen government against the rebels, Turki al-Maliki, said Saudi Arabia and the UAE "succeeded in calming the situation in Aden".

"We hope that all Yemeni parties in Aden cooperate," he said during a press conference.

South Yemen was a separate state until it merged with the north in 1990. Four years later, an armed secession bid ended in occupation by northern forces, giving rise to resentments which persists to this day.

The Saudi-led military coalition, which has backed pro-government forces against the Huthi rebels since 2015, sent a delegation to the city on Thursday to discuss the new front in the crisis.

The UAE is Saudi Arabia's main partner in the coalition fighting the rebels, but trained and equipped the separatists.

Analysts say the break between Hadi's internationally recognized government and the separatists reflects a wider rift between Riyadh and Abu Dhabi that threatens to undermine their common battle against the Huthis.