Report: Cabinet to Meet in Beiteddine amid S&P Downgrade Concerns 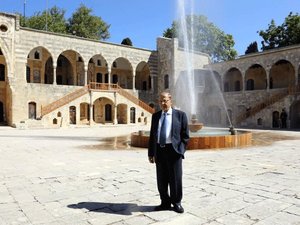 An agreement was reached between senior officials to call the Cabinet for a meeting on Thursday at the summer presidency residence in Beiteddine to discuss the latest political and economic developments, al-Joumhouria daily reported on Tuesday.

It said preparations are underway between Director General of the Presidential Palace and the Secretary General of the Council of Ministers to arrange the agenda that will be circulated to the ministers today, added the newspaper.

After around a one-month government deadlock over the Qabrshmoun incident, the Cabinet is expected to restore its activity to face a new economic challenge.

According to Goldman Sachs Group Inc., Standard & Poor's Global Ratings could downgrade Lebanon’s sovereign ranking to CCC on Friday, “increasing the risk of its sovereign bonds."

Analysts at Goldman Sachs said in a note last week that "the continued deterioration in Lebanon's foreign liquidity suggests a possible downgrade to the CCC ranking.”

Ya 3ayn this president has been great for the country, he has promised everything and delivered nothing but hate...